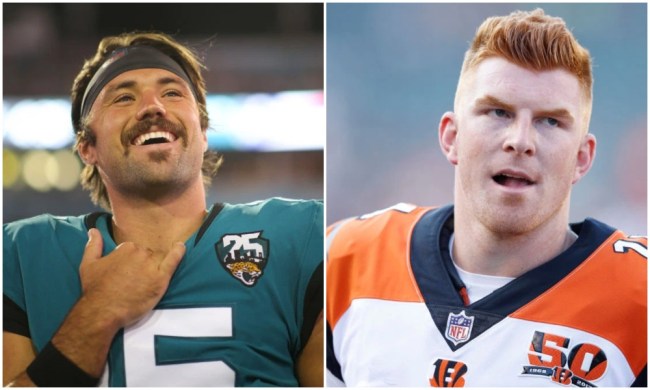 The Cincinnati Bengals releasing Andy Dalton had been a rumor ever since the Bengals clinched the No. 1 overall pick for the 2020 NFL Draft and on Thursday they made it official and released ‘The Red Rocket.’

Immediately following the news of Dalton’s release, everyone’s attention turned to possible suitors that may be interested in adding the three-time Pro Bowler. Most teams around the league have filled their quarterback rooms already, but the Patriots and Jaguars are two teams that the addition of Dalton certainly wouldn’t hurt anything.

NFL insider Jeff Darlington confirmed the rumors that the Jags are interested in Andy Dalton, but for anyone worried about Dalton coming in and taking Gardner Minshew’s starting quarterback role, don’t get too worked up, Minshew Mania isn’t going anywhere. Well, at least for now.

Jaguars are absolutely interested in Andy Dalton — but even if he signs, based on my conversations, I’d anticipate Gardner Minshew as the Week 1 starter. I don’t sense Jags would be signing Dalton with the mindset of “upgrading” from Minshew. They still like what they have there.

The Jags recently dealt Nick Foles to Chicago so adding Dalton to the fold, both as a backup and someone to push Minshew, would make a ton of sense. It’s clear that Jacksonville is going all-in with Minshew, but every team needs a backup and there are worse routes to go than signing an experienced guy like Dalton.

Dalton certainly didn’t have much help around him in Cincinnati over the last few seasons and is coming off of a 2019 campaign where he tossed a career-low 16 touchdowns to go along with 14 interceptions in 13 games played.

Minshew, on the other hand, burst onto the scene last season with over 3,200 yards passing, 21 touchdowns and six interceptions in 14 games as a rookie.

Related: The Bengals Released QB Andy Dalton And Everyone Made The Same Joke About Bill Belichick Wanting To Sign Him To The Patriots