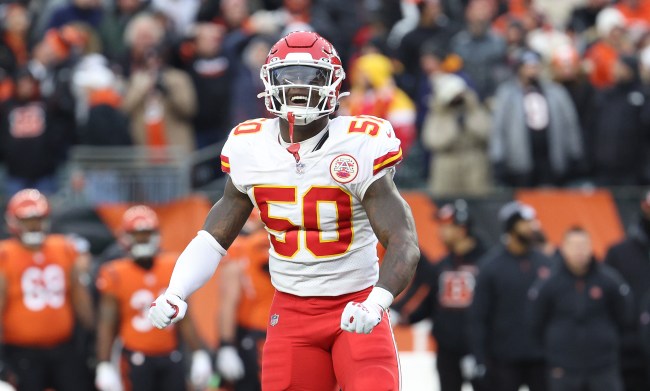 Less than 24 hours ago, news broke that Willie Gay had been arrested. It was assumed at the time that he would miss this weekend’s pivotal playoff clash between the Kansas City Chiefs and Buffalo Bills. As it turns out, that won’t be the case.

The Chiefs linebacker’s arrest stemmed from an alleged incident with the mother of his child where he is accused of having broken a vacuum and other items. He later pled not guilty to a charge of misdemeanor criminal damage.

Andy Reid said Willie Gay will play against the Bills on Sunday. He returned to practice today

Reid’s reasoning was, “I decided he’d play. I’m not going to get into conversations. But I decided that after just hearing some of the information there.”

Willie Gay’s rep has also chimed in, stating his belief that this issue would resolve itself quickly. “Likely just pays a fine and replaces vacuum. Nothing more, all should be resolved today with no further issues.”

The Chiefs defense will need every player possible available for Sunday. They’ll be taking on a potent Bills offense who just absolutely shredded the Pats defense. The Bills scored on every possession in that game until they started kneeling to close out the win.

These teams have already met once this season and the Chiefs had no answers for the Bills offense. Josh Allen put up 3 passing touchdowns and added another one rushing as the Bills won 38-20.

The Chiefs haven’t looked like the same team that played that game lately and they’ll be hoping they can avenge that loss this weekend. Maybe Willie Gay will play some part in that.