Angel Hernandez Blew Another Obvious, Crucial Call And It Has To Be A Prank At This Point, Right? 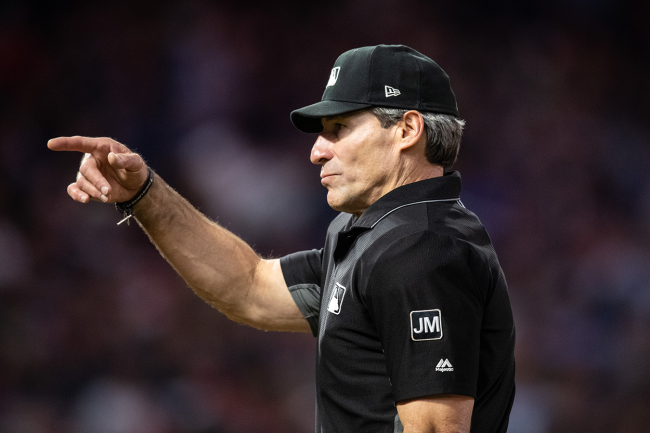 Another day, another week, another month, another call blown by Angel Hernandez.

The worst umpire in Major League Baseball was up to his old tricks late on Friday night as the Rangers battled back from a 3-0 deficit to beat the Twins 6-5. It was an exhilarating game, anchored by the home team’s six-run fifth inning.

However, it was marred by a terrible call in the ninth inning. Hernandez, of course, was the culprit.

Over the course of the last 22 years in the MLB, the 60-year-old umpire has become a household name for all of the wrong reasons. Hernandez consistently makes egregiously bad calls, as he did to begin the season and as he did again last month.

It’s really baffling how he is still around, but he is.

Friday’s game between Minnesota and Texas went to the ninth inning as a one-run game. The Twins, behind by one in the top half, sent Byron Buxton to plate as the leadoff man.

With nobody on and no outs, Buxton knocked what appeared to be a single down the third base line. It bounced off of the infield dirt, off of Rangers third baseman Charlie Culberson’s arm and toward the dugout.

There was a decent shot that Buxton could have stretched it to a two-bagger, but it was at least a leadoff single. Until it wasn’t.

In real time, it looked to be a fair ball. On the replay, it was confirmed as such. And it wasn’t particularly close. It was very fair.

But Hernandez called it dead. The play was not reviewable.

Angel Hernandez calls a ball foul that clearly bounced on the chalk on replay pic.twitter.com/5nJW1XE87A

Buxton went back to the box where he proceeded to strikeout. Two quick outs later and the game was over.

Hernandez once again managed to blow a crucial call in a big spot. Minnesota would have had the leadoff man aboard — perhaps in scoring position — but didn’t.

Of course, the jokes were endless.

Angel Hernandez would fall for this pic.twitter.com/p32Pg0pIat

Angel Hernandez being the worst umpire in The MLB pic.twitter.com/rzDvhR1EUl

Me, when I see Angel Hernandez trending: pic.twitter.com/WeTDXnLGro

Angel Hernandez should step on a Lego every day for the rest of his life.

Angel Hernandez is the only person/thing/entity capable of uniting all Americans. Republicans, Democrats, religious people, atheists, all are in agreement that this guy sucks and should not be employed.

Any call made by Angel Hernandez should be reviewable.

Death, taxes, Angel Hernandez up to no good.