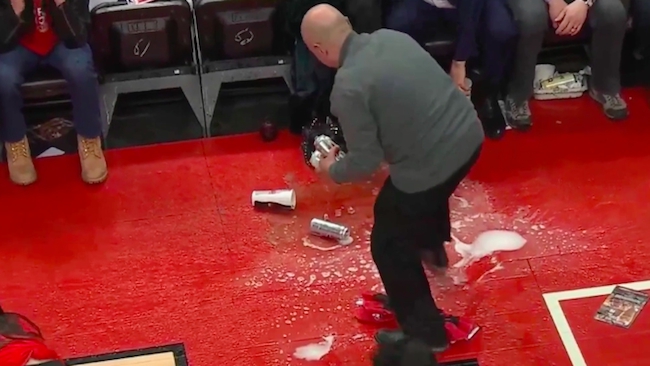 Last night, the Toronto Raptors did a great job making everyone on the visiting Washington Wizards feel bad about themselves by going up 2-0 in their playoff series thanks to a 130-119 victory in a game that was never really a contest at all. The fans north of the border had plenty to cheer about, but the arena was quieted in the second quarter after there was an absolutely devastating loss on the court: a bunch of beers that were spilled onto the court by one of the arena’s beverage vendors.

The game came to a halt as the people who get paid to wipe the floors with towels at NBA games frantically scrambled to minimize casualties, but the error resulted in a number of wounded soldiers who would never have the chance to carry out their mission of giving fans the overpriced buzz they seek.

TSN commentator Jack Armstrong was forced to hold back tears as his play-by-play partner Matt Devlin attempted to console what was dubbed by the Canadian crew as a “national crisis” (the cans appeared to contain Molson, which makes this hit even closer to home).

According to Jack Armstrong and @Matt__Devlin a “National Crisis” happened in the 2nd quarter with a vendor spilling their tray of beer courtside. #WeTheNorth pic.twitter.com/otMPR3WjRJ

This is obviously a sad story for everyone involved, but if you’re looking to lift your spirits after something so depressing, then I’m glad to inform you there was another beer-related incident at a different NBA playoff game last night that had a much happier ending.

While walking back to his seat with a fresh beverage, a fan sitting courtside at the game between the Bucks and the Celtics narrowly avoided a collision with Jayson Tatum, which would have resulted in the most beer unnecessarily spilled during a night of NBA action since The Malice at the Palace.

Get someone who takes care of you like this guy and his beer 🤗 pic.twitter.com/r72wPauUOb

Congratulations to The Neo of NBA fans for managing to save his brew.