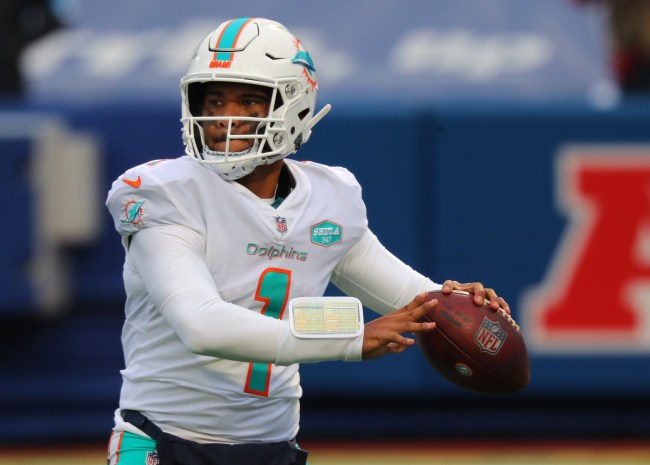 The Miami Dolphins have already said they’re committed to Tua Tagovailoa being their starting QB for the 2021 season but some players within the organization are already questioning the team’s decision.

On Wednesday, Miami Herald columnist Armando Salguero spoke to three anonymous Dolphins players about Tagovailoa and they told him they’re unimpressed with the young QB. The players went to say they were shocked when the team decided to start Tagovailoa midway through the season because they believe Fitzpatrick is better than him.

Via The Miami Herald

And another said that before the season finale when players were informed by Flores that Ryan Fitzpatrick would not be available against the Buffalo Bills, he was disappointed because he believes Fitzpatrick was better than Tagovailoa. …

The players aren’t sure whether Tagovailoa will ever be good enough to compete with the elite quarterbacks in the AFC.

One defensive player said he isn’t impressed with Tagovailoa’s ball velocity or arm strength or ability to make off-schedule plays with his legs. So he ultimately questions whether Tagovailoa will ever be able to match the feats of other quarterbacks in the AFC such as Josh Allen, Patrick Mahomes or Deshaun Watson.

“Those are the boys we got to beat, right?” this player said. “It looks right now like that’s going to be a big challenge.”

An offensive player said he likes Tagovailoa a lot as a teammate and is hopeful he becomes “great someday.”

It’ll be interesting to see if the Dolphins would even consider trading for disgruntled Texans QB Deshaun Watson, who is rumored to be open to dropping his no-trade clause to go to Miami, after the latest comments from the anonymous players.