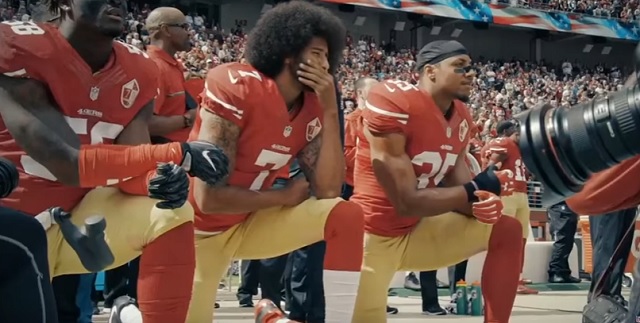 Colin Kaepernick might be getting blackballed from playing in the NFL not because of his abilities but because he decided to speak his mind.

Mike Freeman of Bleacher Report spoke to an NFL GM and he said that Kaep probably won’t get another chance to play in the league because several execs can’t stand him for kneeling during the national anthem last season.

“He can still play at a high level,” one AFC general manager said. “The problem is three things are happening with him.

“First, some teams genuinely believe that he can’t play. They think he’s shot. I’d put that number around 20 percent.

“Second, some teams fear the backlash from fans after getting him. They think there might be protests or [President Donald] Trump will tweet about the team. I’d say that number is around 10 percent. Then there’s another 10 percent that has a mix of those feelings.

“Third, the rest genuinely hate him and can’t stand what he did [kneeling for the national anthem]. They want nothing to do with him. They won’t move on. They think showing no interest is a form of punishment. I think some teams also want to use Kaepernick as a cautionary tale to stop other players in the future from doing what he did.”

When I spoke to a handful of executives at the combine a few weeks ago, one even called him “an embarrassment to football.”

This is shitty and it’s exactly why more athletes don’t speak out.