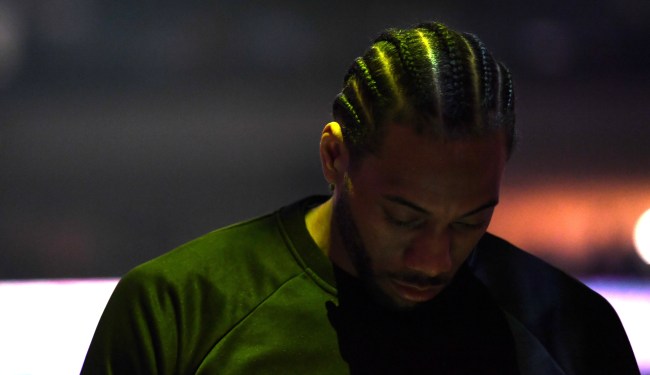 Signing a big three-year contract for more than $100 million is akin to putting a bullseye for criticism on your back. This is something Kawhi Leonard, now of the Los Angeles Clippers, is starting to find out..

He may now be a NBA champion and a NBA Finals MVP, but not everyone is sold on Leonard’s character and leadership abilities. Apparently those are things that NBA general managers desire over and above just being one of the best two-way players in the game, especially when the chips are down and a play has to be made at key points in a big game.

In a new article by Ric Bucher of Bleacher Report, a couple of those NBA GMs were critical of the Clippers’ new big man.

…one Western Conference general manager stopped short of describing him as a leader because of his sphinx-like demeanor and his limited playmaking ability. (For comparison, Jamal Crawford, considered primarily a scorer, averaged more assists — 3.6 — in 18.9 minutes per game than Leonard did — 3.3 — in 34.0.)

“Kawhi is great getting his, but he doesn’t elevate anyone,” the GM says. “He doesn’t rally his team.”

An Eastern Conference vice president of player personnel somewhat agrees. “He does have leadership qualities,” he says, “but it depends on how you define ‘leader.’ He’s obviously not vocal, and he’s not a galvanizer. He does it with his work ethic and by example.”

Leonard will be eligible in two years for a supermax salary, but right now, according to one former player who is now a front-office executive, he isn’t worth it.

“Guys that I played with, guys that I continue to watch, I want them to get as many dollars as possible,” he said. “But when we talk about that term — ‘max guy’ — how many of those guys, realistically, are there?”

Bucher reports that he isn’t the only NBA executive who thinks that way.

Ten free agents signed maximum-salary contracts this summer. How many check all the boxes that a team would want from a player making the absolute most it can pay him?

Based on an informal survey of a half-dozen NBA front-office executives: not one.

If true, when considering the fact that players like Stephen Curry, James Harden, Damian Lillard, Russell Westbrook, John Wall and Chris Paul (sort of), have all been signed to supermax contracts over the past few years, one has to wonder how many of those teams regret it (other than Houston).