Another New York Jets Receiver Has Shockingly Requested A Trade 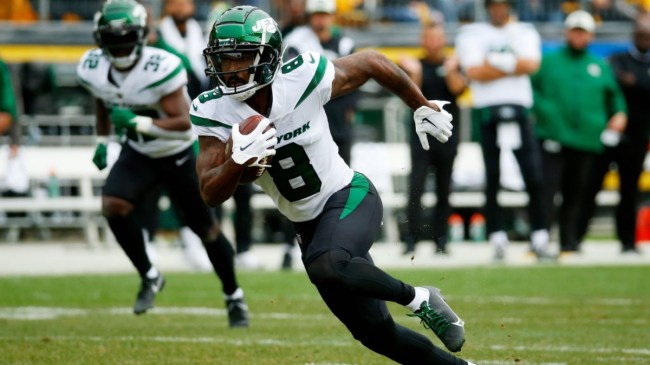 Over the summer, the New York Jets were hit with some surprising news. Just 2 years after the New York Jets had drafted him, Denzel Mims wanted a trade. He had played sparingly during his first 2 season and didn’t appear to be a part of their plans, so he wanted a chance to play somewhere he could carve out a role.

A trade never came and he absolutely shredded the Giants defense shortly after in a preseason game. Since that preseason performance, the situation hasn’t come up much despite the fact that he hasn’t even appeared in a game yet for the Jets this season.

Now it seems the Jets have another wide receiver who is unhappy. Today, Ian Rapoport shockingly reported that Elijah Moore has asked to be traded by the Jets.

Elijah Moore asks to be traded by the New York Jets

Sources: #Jets WR Elijah Moore, frustrated with his role and usage, has asked for a trade. The team has no plans at all to trade him. The former second rounder was targeted once in the win over the #Packers, but the play was negated by a penalty. pic.twitter.com/JJvSbnxXZ1

The Jets spent an early second round pick on Elijah Moore just a season and a half ago. He flashed a lot of promise in the second half of his rookie season, posting 28 catches for 264 yards and 2 touchdowns over his last 3 games.

He was expected to build on that in year 2, but hasn’t made the leap many were expecting. His season highs are just 5 catches and 53 yards and over the past 2 weeks he has just 1 catch. Last week against the Packers, he didn’t even have an official target.

It would be very surprising to see the New York Jets actually deal Moore this early in his career, but if they do decide to grant his request, there should be a very robust market for his services.