Another NFL Team Has Decided To Bench Their Starting Quarterback 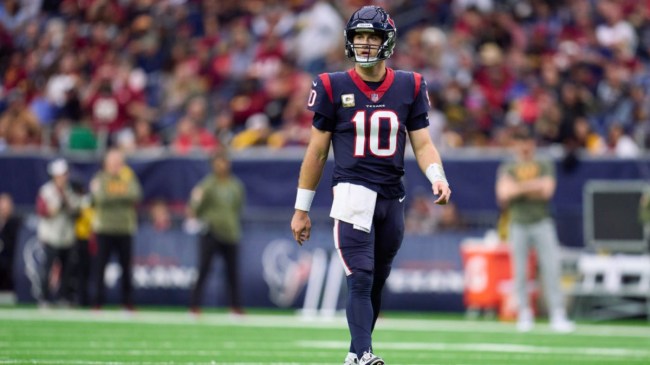 It has been a rough year for 2nd year quarterbacks. Trey Lance was injured and ruled out for the season early in the year. Mac Jones has missed games because of injury and has struggled when he has played. Trevor Lawrence has been better in year 2, but still isn’t living up to the hype he entered the league with.

Justin Fields is now dealing with a shoulder injury.

Today was a particularly bad day for the quarterback class. Earlier today the New York Jets decided to bench Zach Wilson, who has had a brutal few weeks.

Now the Houston Texans have decided to follow in the Jets’ footsteps. They announce today that they were benching Davis Mills. According to NFL Network’s Mike Garafolo, Kyle Allen will start in his place on Sunday.

It’ll be Kyle Allen for the #Texans at QB Sunday, sources say. Lovie Smith declined to make a starter in his press conference today.

During the offseason the Texans opted not to pursue a new quarterback and instead stuck with Mills.

Mills had been surprisingly dependable for the Texans in his rookie season. Mills threw for 2664 yards and 16 touchdowns in 13 games as a rookie and even managed to win a couple of games with a depleted roster.

Unfortunately this season hasn’t provided nearly as much of a reason for the Texans to be optimistic about his future. In 10 games, Mills has thrown for 11 touchdowns and 11 interceptions and the team has gone 1-8-1.

Now they’ll move on to Allen, who shouldn’t be expected to be much of an improvement and certainly isn’t the team’s answer at QB.

Now the Texans can move on to scouting a very talented QB class for next year’s NFL Draft to figure out that answer at QB will be for their franchise going forward.