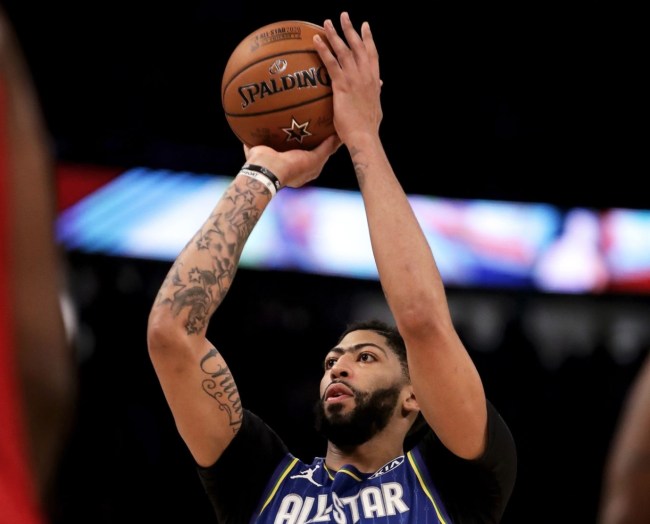 The NBA All-Star game on Sunday night was not boring thanks to the new format, which isn’t something anyone has been able to say in quite some time.

It essentially turned the fourth quarter of the All-Star game into a really unique situation making the best players on the planet simply chase a point total. It made it much more exciting for the fans, plus, none of these guys really like to lose so playing a bit closer to full-throttle and actual defense during the final quarter wasn’t too big of an ask.

With Team Lebron leading 156-155, James found Anthony Davis down low and he was fouled by Kyle Lowry sending him to the free-throw line for a chance to win the game. James immediately shouted to the crowd ‘it’s over’ as Davis is shooting 85.3% from the charity stripe this year and all he needed was one to win the game.

Davis missed the first free throw attempt before sinking the second one to give Team LeBron the win. During a postgame interview, the big man actually said he told his entire team that he was going to miss the first attempt just to add more pressure to the moment, which, for some reason, folks aren’t recognizing the sarcasm in his statement.

“I told my team I was going to miss the first one and put a little more pressure on myself here at home.”@AntDavis23 talks to @ALaForce after he knocked down the game-winning free throw to win the #NBAAllStar game for #TeamLeBron. pic.twitter.com/xQQMry7yYp

Who in their right mind is going to miss a game-winning free throw attempt in a one-score game where there’s literally not a clock and the two sides are just chasing a number on the scoreboard? He wouldn’t have heard the end of it from LeBron if he missed both free throws.

Hats off to The Brow for hitting the game-winner and then keeping it super light by trolling everyone in the postgame interview, though, he was certainly relaxed after picking up the win.