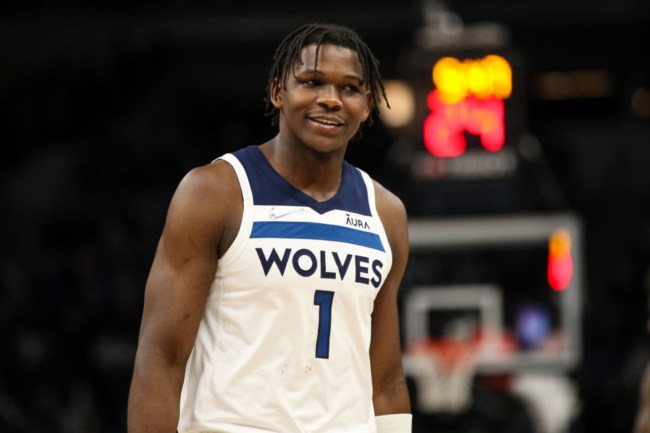 Anthony Edwards is one of the most fun young players to watch in the NBA and his performance on Thursday night against the San Antonio Spurs is just the latest example of that.

With his Minnesota Timberwolves already punching their ticket to the play-in tournament, Edwards decided to have some fun of his own against the Spurs.

Edwards had 50 points on his mind on Thursday, and everyone in the building knew it.

The former Georgia star got off to a good start against San Antonio and with just over a minute left in the game, with Minnesota up nine, Edwards had 47 points to his name.

With the game out of hand, most teams would dribble out the clock, shake hands, and get out of there. Not the Timberwolves, and especially not Anthony Edwards.

The T-Wolves kept feeding Edwards the ball late in the game and he kept chucking up threes from quite literally everywhere.

up by 9 with 1:20 left, Anthony Edwards would not stop shooting threes in an attempt to get 50 points. Spurs get within 4 with 8 seconds remaining, Wolves hold on to win. pic.twitter.com/fT4ugnZH0p

Ultimately, Edwards ended the night with just 49 points, but it certainly wasn’t from a lack of trying.

“I was trying my best to get 50, couldn’t do it,” Edwards said after the game.

“I missed a free throw. Shot 5 threes in a row, missed them. Two of them looked like they was going in. It’s all good man. Came out with the win — that’s all that matters.”

NBA fans had some rather funny reactions to Edwards’ late-game attempt at a 50-piece:

I wish all my players kept this energy when i’m trying to hit a parlay https://t.co/2LUYW30SjL

He’s actually hilarious for this, bro was settling nothing less than a 3😭 https://t.co/C7YU8qobrN

that left wing three was not cooking at all lmaooo https://t.co/zfYp8tgP1p