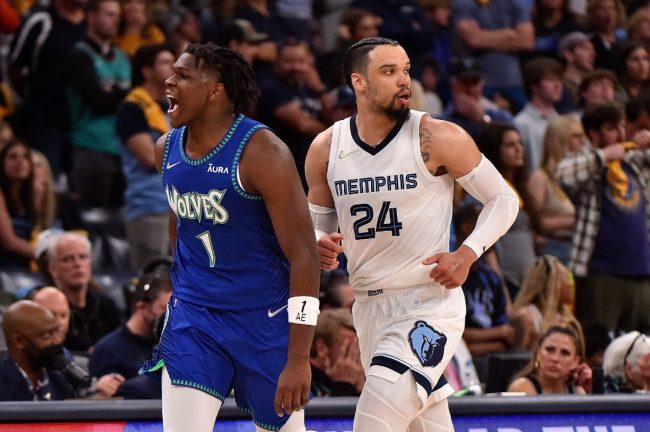 Anthony Edwards and the Minnesota Timberwolves are playing well at the right time.

After landing a win in the play-in game against the Clippers (though they might’ve celebrated that win a little too much), the T’wolves are now in Memphis to take on the second-seeded Grizzlies. And they’ve already gotten a huge victory to start the series, giving the underdogs a 1-0 advantage.

In game one, Edwards absolutely went off, scoring a game-high 36 points and outplaying Grizzlies star Ja Morant in the process. The second-year player shot 52% from the field while going a perfect 8-for-8 in from the free throw stripe.

Thanks to Edwards’s play, Minnesota secured an upset as they try to advance to the second round of the playoffs. It’s not the first time he’s performed well against the Grizzlies in Memphis. He went off for 42 points against them in his rookie campaign.

After the game, Edwards was asked about his trend of high scoring outputs against the Grizzlies, and what motivates him to play better in Memphis.

His answer? The fans.

"The kids was the worst today" 😂

Anthony Edwards says the kids were trash-talking him the most in Game 1 against the Grizzlies pic.twitter.com/rcd1rm5Wse

“I think Memphis fans ignite my game when I play here. They talk so much trash.”

Edwards didn’t hold back, even bringing the youngsters into the discussion, as they must’ve heckled the star guard in game one.

“The kids were the worst today.”

He doesn’t seem to mind the trash talk one bit. He’ll certainly have to keep up his level of play in game two or the fans will surely let him have it. Edwards will lace them back up on Sunday as the Timberwolves look to take a 2-0 lead back home to Minnesota.