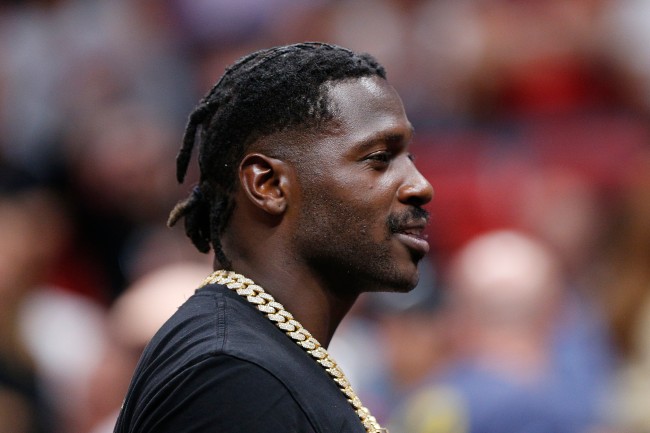 Despite being unemployed business is still boomin for Antonio Brown.

Brown is current;y being sued by multiple people while he sits out from the NFL as he tries to clear his name.

This morning on Instagram AB took a shot at all those people suing him by showing off his bank account and claiming they all are making up stories to take a piece of what he’s earned. 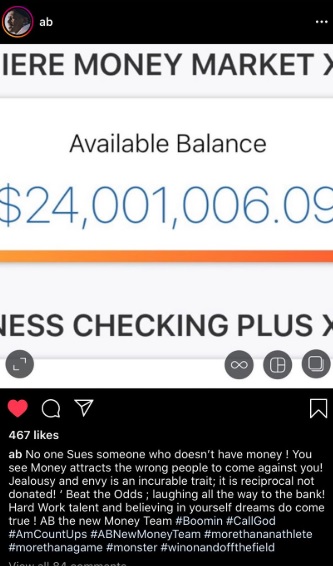 No one sues someone who doesn’t have money. You see money attracts the wrong people to come against you. Jealousy and envy is an incurable trait. It is is reciprocalnot donated beat the odds. Laughing all the way to bank. Hard work, talent and believing in yourself dreams do come true. AB the new money team.

Brown is most notably being sued over a rape allegation from his former trainer Brittany Talor that is still pending in Florida.

Antonio Brown is being sued by a woman who claims the WR sexually assaulted and raped her during 3 separate encounters … this according to a new lawsuit obtained by TMZ Sports.

The woman behind the lawsuit, who identifies herself as Britney Taylor, says she was hired by Brown as a personal trainer. Taylor claims the first incident happened in June 2017 during a training session when “Brown exposed himself and kissed [her] without her consent.”

Several months later, the accuser claims Brown reached out to her to express contrition and “begged forgiveness.”

Taylor claims Brown begged her to continue training him — and after initial hesitation, she ultimately agreed.

However, the woman claims nearly a year later — on May 20, 2018 “Brown cornered [her] forced her down onto a bed, pushed her face into the mattress, and forcibly raped her.”

It is also worth noting that Brown is currently filing a grievance against the Raiders and the Patriots in attempt to recoup $40 million in unpaid guarantees.

From earlier: FA WR Antonio Brown officially filed his grievance quietly on Friday at 5 pm, asking for more than $40M back from the #Raiders and #Patriots. My story: https://t.co/fzJG6OtdwB

Brown eventually deleted the Instagram post because it was probably not a good idea to reveal how much money you have while fighting multiple lawsuits.