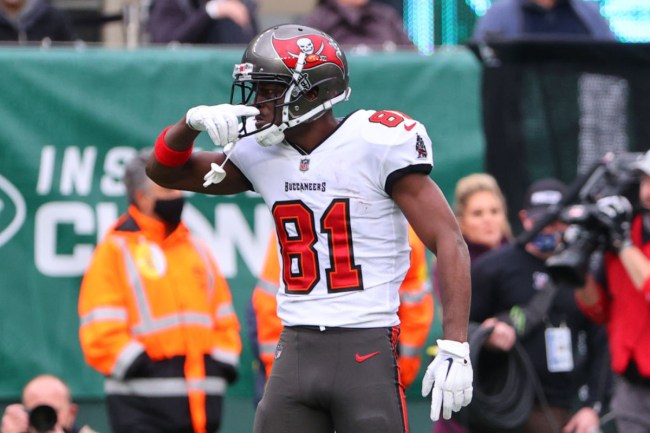 It’s been a rather eventful, well, career really for Antonio Brown, but the antics he pulled this past weekend during the Bucs’ game against the Jets may sit atop the list of the crazy stunts the wide receiver has pulled over the years.

Brown took off his jersey and shoulder pads left them on Tampa Bay’s sideline and left Metlife Stadium in the middle of the game pumping up the fans during his exit. It would have been shocking to see any other player do such a thing, but with it being AB, the sports world collectively shrugged unamused.

In the aftermath of all this, we’ve heard Brown’s side of the story and we’ve since heard the Bucs’ and head coach Bruce Arians’ breakdown of what exactly went on prior to his in-game exit.

The drama is aplenty when it comes to Brown, and it likely always will be, but that didn’t keep Sports Illustrated from asking if ‘the Antonio Brown experiment’ in Tampa Bay was worth it.

Was the Antionio Brown experiment in Tampa worth it?@ConorOrr shares his thoughts ⬇️ pic.twitter.com/n04FxLveJ9

Antonio Brown Was A Huge Piece For The Bucs

The Bucs, Tom Brady, and everyone within the Tampa Bay organization knew what they were getting with AB. They were going to get an all-time wide receiver, but also a guy with baggage that goes to the beat of his own very loud drum.

If you take away the off-field, and most recently on-field drama, which I understand is pretty much impossible to do, AB was beyond solid for Tampa Bay.

In 15 regular-season games over the last two seasons, Brown hauled in 87 catches for 1,028 yards, good enough for an average of 11.8 yards per catch. While those numbers are strong, it was during last year’s Super Bowl when AB really stepped up as he caught five catches on six targets and a touchdown. His touchdown with six seconds left in the first half completely changed the contest giving Tampa Bay a 15-point edge at the break.

Brown, even with all the drama, helped the Buccaneers win a Super Bowl, which is exactly what the NFL world screamed in response to Sports Illustrated’s tweet on Thursday:

Lol they literally won the SB. Of course it was worth it. Banners>>>>> https://t.co/jKI2fK4HXD

Well he helped them win a SB so … yeah?? https://t.co/MGz8DsdIwC