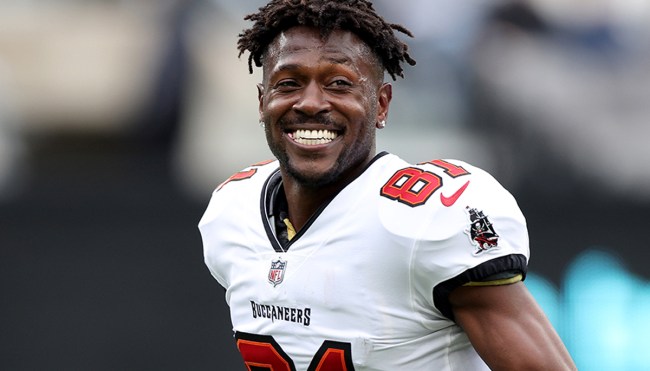 Antonio Brown had a major meltdown on the Buccaneers sidelines Sunday afternoon. The veteran wide receiver was spotted taking off his shirt and pads, tossing his wristbands into the crowd, and b-lining for the locker room three minutes remaining in the third quarter.

As you can imagine, most around the NFL world were caught off guard. Not surprisingly, the bizarre temper tantrum has caused a stir on social media.

Check out some of the reactions below.

Just love to see an all-time great walk away on his terms 👏 https://t.co/haWAd4mYEP

this is a whole new level of wild https://t.co/StUCnxLDXt

Hell, even OJ Simpson, one of the league’s most controversial players of all time, chimed in on the AB tantrum.

It’s not the first time that drama has surrounded the pass catcher. He was suspended earlier this year for faking a COVID vaccine card. He overstayed his welcome in Pittsburgh prior to that, which led to the All-Pro wideout being traded in 2019. He bounced in and out of the league before landing a roster spot with the Bucs midway through last year.

At the time of the trade, many looked to Pittsburgh players and staff as being the issue. It’s clear that that wasn’t the case, now.

The move could turn out to be a costly one for Brown, who needed just a few more catches to unlock an extra $1,000,000 in bonuses.

After the game, head coach Bruce Arians stated that the receiver was “no longer a Buc.”

With Brown out of the lineup, the Bucs outscored the Jets 18-0 to land a come-from-behind victory. His NFL future is now in jeopardy.