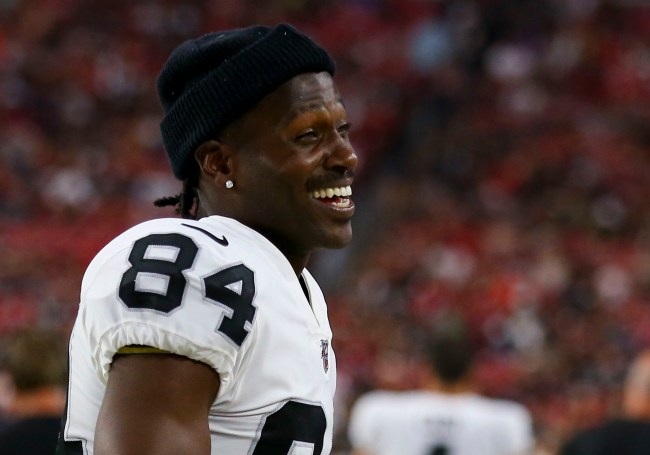 After a bizarre week where he reportedly called his GM a cracker, secretly videotaped his head coach and got released, Antonio Brown is now a New England Patriot.

Breaking: Antonio Brown has agreed to terms with the Patriots, per @AdamSchefter. pic.twitter.com/WMcbDxcECb

Antonio Brown has agreed to a deal with the New England Patriots, his agent, Drew Rosenhaus, told ESPN’s Adam Schefter on Saturday.

New England is giving Brown a one-year deal worth up to $15 million, Rosenhaus said. It includes a $9 million signing bonus, $10 million guaranteed and $5 million in incentives.

The agreement comes hours after Oakland released Brown to end a tumultuous stint with the Raiders, who acquired the Pro Bowl wide receiver via trade during the offseason.

Antonio Brown woke up today in Oakland, in a feud with the Raiders that ended in his release.

He will end his day as a Patriot, getting ready to watch his new team square off Sunday night vs his former Steelers' team.

It took the NFL 100 seasons to produce a story like this.

Before signing with the Patriots, Brown posted this video of himself celebrating his release from the Oakland Raiders early this morning.

Apparently, people around the league believe Brown may have orchestrated his exit from the join the Patriots.

People I’ve talked to in the league think was intentional. He wanted out and go to NE. Not sure I’m buying it

I just got a text from someone I trust in the league and they believe this was all coordinated. That at some point AB got word that Pats would sign him if he ever got released.

I got the text immediately and it wasn’t someone random lol. They think it is real fishy. Don’t be shocked it Raiders ask League to look into it.

If this turns out to be true it would be the most diabolical move in the history of the NFL.