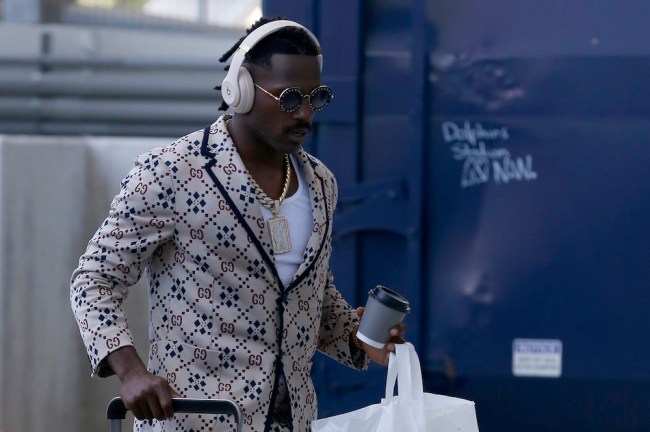 On Friday, the NFL ruled on the official punishment for the off-field issue of free agent Antonio Brown. The league suspended Brown 8 games to start the 2020 season, should a team take a chance on the troubled wide receiver.

If Brown does sign with a team, he’ll be eligible to participate in training camp, but his suspension kicks in on September 5 and runs through game 8 of the season. The suspension also counts if Brown doesn’t sign, which would make him eligible to sign and play with a team after week eight.

Brown’s agent, Ed Wasielewski, confirmed the news on Friday, stating, “He is excited to resume his outstanding football career and is looking forward to playing in the 2020 season.” Brown will not appeal the suspension.

After Wasielewski’s official statement, AB made a statement of his own on Instagram.

“I look forward to new beginnings. I want to be the best version of myself on and off the field, and I will do my best to be a great teammate.

I appreciate the NFL giving me the opportunity to continue to work on myself and improve.

I am thankful and grateful for this opportunity to play a game that I truly love and I look forward to joining a new team soon.

Thank you to my family and all those that have supported me. I will show the fans my appreciation for this second chance by having the best season of my career. #AB2.0 #Himmothy”

Earlier in the week, Brown demanded the NFL review and decide his fate and if a decision didn’t come soon, he would officially retire from football.

“At this point,” tweeted Brown, “the risk is greater than the reward thank you everyone who been part of this journey i sincerely thank you for everything! life goes on 84!”

Several teams have expressed interest in adding Brown to the roster, including the Seattle Seahawks and Baltimore Ravens.