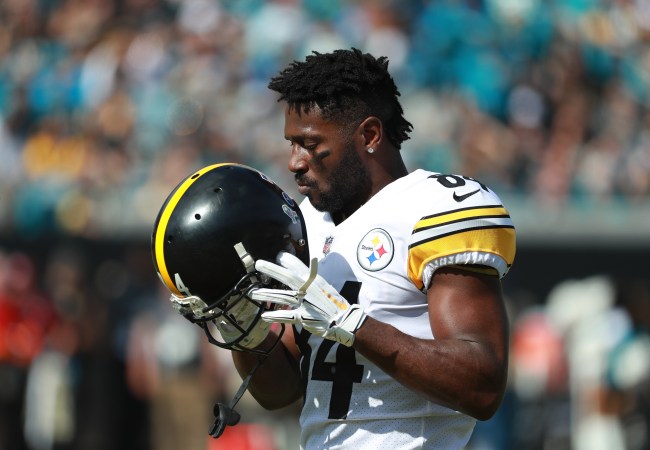 The Antonio Brown helmet drama continues to drag on.

Last week, the moody Oakland Raiders superstar wide receiver filed a grievance against the NFL in an effort to be able to wear his preferred helmet that is currently non-compliant due to changes in the league’s helmet policy.

According to the Athletic’s Daniel Kaplan, Brown has warned the NFL that he would hold the league liable if he got any head-related injuries while wearing the new league-mandated helmets.

Raiders @AB84 warned the NFL Fri if the league forced him to switch helmets and he suffered a head injury, he would hold them liable. my storyhttps://t.co/JwESfSiOVZ

During Friday’s grievance hearing, Antonio Brown’s camp warned the NFL that if he suffered a head injury in a helmet that he is compelled to wear, he would hold the league liable, per @KaplanSportsBiz. An arbitrator is expected to rule on Brown's grievance this week.

The NFL has already fired back at Brown and told them that they could void his contract if he continues to wear his old helmet in practice.

According to Sports Illustrated legal expert Michael McCann Brown doesn’t have much of a case against the NFL if he plans to hold them liable in case of injury under the new helmet rule.

Would Antonio Brown win in a legal dispute over the NFL if his grievance fails? @McCannSportsLaw says Brown has better odds of catching a Hail Mary than convincing a court he has a legal right to wear his preferred helmet https://t.co/YZe8dqlRwS

A complaint along these lines would likely go nowhere. The helmet rule is designed to promote, not degrade, safety. Unless Brown has access to scientific data and medical evidence that contradicts that of the NFL and NFLPA, it is unlikely that a government agency would conclude that the helmet rule makes playing football less safe. This is particularly true since Brown’s union participated in the testing of the helmets.

AB might as well take this L and start getting used to wearing a new helmet at this point.