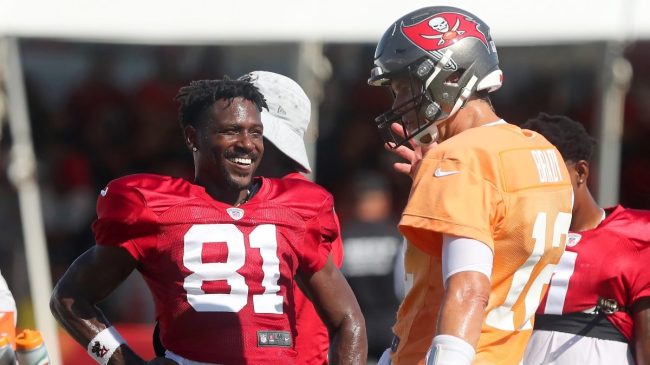 Antonio Brown has been all over the place in recent years. His latest stun has him under fire, as he exposed himself in a public swimming pool. Now it seems Brown trying to stir the pot with Tom Brady after sharing this insanely wild post about Gisele Bündchen.

Antonio Brown Indicates Some Sort Of Relationship With Gisele Bündchen

Out of absolutely nowhere, Brown shared a pic of him and Bündchen on Instagram. It’s nothing crazy, as it’s just the two of them celebrating the Tampa Bay Buccaneers’ Super Bowl win immediately after the game. However, the caption for the photo has everyone talking. “Put that S*** On.”

It’s tough to say exactly what Antonio Brown means here. He could be indicating he had relations with Tom Brady’s wife. Or he could be stating he wants to. Of course, this could simply be a convenient distraction from his most recent incident. Either way, this is a crazy Instagram post about Gisele Bündchen. Especially considering Brady and his family gave Brown a place to stay when he first signed with the Buccaneers.

Based on Brown’s past behavior, it’s safe to assume the worst. He hasn’t quite been a model citizen. Tom Brady and Gisele Bündchen have yet to acknowledge the Instagram post. Brady is busy preparing for a game against the Kansas City Chiefs while Bündchen is busy with her own life.

This might be something to monitor, as the Buccaneers quarterback might be asked about it at some point. Until then, this is strictly speculation with Antonio Brown simply stirring up unnecessary drama.