Antonio Brown Breaks Silence In First Presser With The Buccaneers: ‘I Just Believed’ 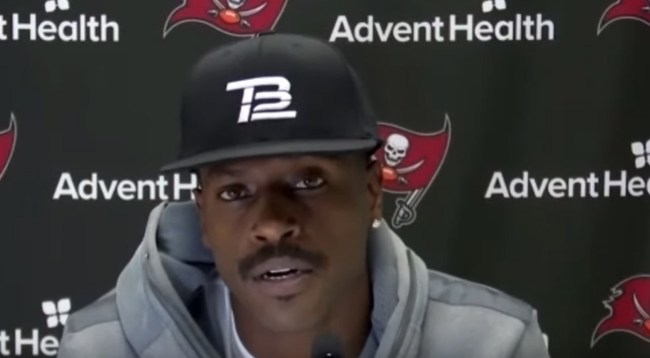 Earlier today it was revealed that Antonio Brown will be making his return to the NFL Sunday night as a member of the Tampa Bay Buccaneers against the New Orleans Saints.

Buccaneers head coach Bruce Arians wouldn’t commit to how many plays Brown will be on the field for, but did say he “wouldn’t anticipate 60 plays.”

On Wednesday, the 32-year-old Brown, rocking a TB12 cap, spoke to the media for the first time since signing with Tampa Bay.

He began by discussing what he’s been doing while he served his 8-game suspension.

“I’ve just been spending a lot of time with family, working on myself within, and just staying resilient, keeping the mind on the mission that’s being a football player,” said Brown. “And doing all the things that come with that, even when times get hard, keeping myself in shape, keeping myself motivated from within, not listening to the naysayers or not giving doubt or worries about will I be able to return. I know I had good trainers, good people around me in my corner that kept me encouraged. They kept me motivated. And I just believed. I knew one day I’d get a chance to be back in this position. And I just tried to check every box to make sure when I was able to get back, that I was ready to go.”

When asked what he would say to any naysayers who don’t believe he’s changed and shouldn’t be allowed to play in the NFL again, Brown replied, “Hopefully, I can change their perspective being here around great people, great organization. Hopefully, I can win them over in my actions and how I move forward and how I handle my business.”

Brown still has to deal with a civil lawsuit alleging that he committed sexual assault and rape, which is supposed to begin proceedings on December 7.

His attorney, Daniel Wallach, is seeking to have that delayed.

BREAKING: Antonio Brown seeks adjournment of the December trial date in his sexual assault civil case. In a new court filing, Brown's attorneys cite a number of reasons for the delay, including the pandemic. The motion was filed 6 days before he plays his first game for the Bucs. pic.twitter.com/MANVP4oRbu

Brown also discussed his relationship with Tom Brady, saying, “Tom is my boy. One of the greatest leaders to be around. He’s encouraging, always inspiring. He brings out the best out of people around him. He wants the best for everyone around him. I mean, he’s the greatest quarterback of all time. Nothing that I’ve done in the past matters. He’s always getting better, day in and day out. And I just learn a lot from him, how he trains, how he takes care of himself professionally. His discipline. His work ethic. His approach. He’s been a great guy in my corner, and one of my close friends.”

Related: Tom Brady’s Stated Reason For Why Antonio Brown Is Living With Him Is Utter Nonsense

“I think there is a lot of similarities in our work ethic,” Brown said about Brady. “Being guys who are supposedly supposed to be underachievers, for guys who were never supposed to make it. Sixth-round late boomers, guys who developed chips. And just wanting to be the best, just yearning for being the best. Always growing, getting better. Obviously he’s the greatest quarterback in the world. So I’m just grateful to be here, to be his teammate, to be in the huddle with him and to be a part of the process here with Tampa Bay. So, super grateful. You know, TB12’s my boy, and I’m grateful for that.”

As for why he chose the Buccaneers, Brown said, “Any time you get a chance to play with the greatest quarterback in the world, to be around Bruce Arians, a great offensive guru. Like you mentioned earlier, be around a lot of great guys who are already familiar with me from the Steelers 10 years ago. … So for me, it was a no-brainer coming here and being around guys who understand me.”

AB also spoke about how Brady put him in touch with motivational speaker Tony Robbins.

“Yeah, definitely, Tom hooked me up with him a couple months ago. He’s been a great asset for me,” said Brown. “We’re working on myself within, unlocking some positive stuff in my spirit, and just being a better person. It’s a lot of time sitting with him, developing some positive things within, changing my outlook on a couple of things, battling and getting away from anger, just being able to stay positive and see the positive things, not letting emotion or frustration ruin my outlook on what’s in front of me. So I really thank Tony Robbins and TB12 for hooking me up with great people that can align me with my purpose and that helped me to see the light, regardless of my future.”

Brown is reportedly in excellent shape, so it will certainly be interesting to see if he can still be the playmaker he was back in 2018 with the Steelers when he led the league with 15 touchdown receiving.

Antonio Brown had a big smile on his face in this morning’s practice. He didn’t participate in any of the special teams walk-through but was stretching on the sidelines. He looked to be in great, he looked happy to be there and he was engaged with his new teammates and coaches.

From this morning on @GetUpESPN, I talked with @espngreeny about Antonio Brown’s role in the Bucs’ offense and what gives the Bucs confidence they can make things work. pic.twitter.com/EeWexLpLcl