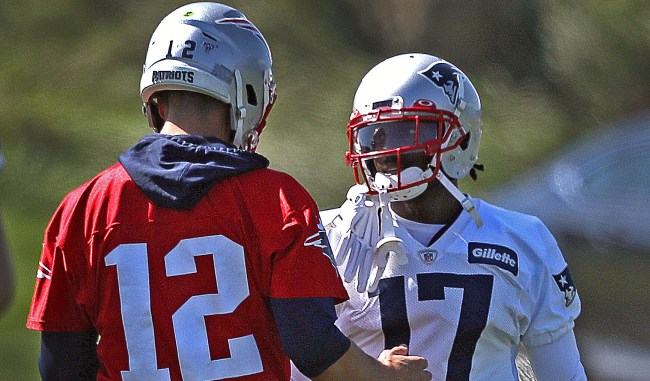 Ever since Antonio Brown signed a contract with the Tampa Bay Buccaneers following his eight game suspension people in and around the organization have been trying their best to obfuscate the truth about the move.

Buccaneers head coach Bruce Arians tried claiming quarterback Tom Brady had nothing to do with Antonio Brown signing with Tampa. No one believed him.

Brady was later asked, twice, how much influence he had in Brown signing with the Bucs. He never did give an actual answer.

When asked to comment on the “disturbing allegations” against Brown, Brady once again completely ignored the question in his response.

Jason La Canfora of CBS Sports wrote, “Brady is the primary reason Brown is in Tampa” and that Tom personally will be responsible for AB attending meetings, following team rules, and abiding by COVID protocols.

Which is why Brown is now currently living at Brady’s house.

Brady, however, continues to try to create a smokescreen for the real reason Brown is living with him during his weekly Monday Night Football pregame segment on Westwood One with Jim Gray.

“Antonio’s a good friend of mine and, again, we’ve gotten to know each other pretty well over the years,” said Brady.

“He’s just getting settled, and I know he’s looking for places, but it’s just nice to have him around. We’re getting to work and he likes to be integrated into what we’re doing, and a big transition for him, moving across the state and really not knowing anyone.

“So again, just trying to be a great teammate and help someone out, and he’s a friend of mine.”

First of all, Brown has had all the free time in the world to find somewhere to live other than Tom Brady’s house, so that’s garbage.

Second, Brown has earned over $76 MILLION in salary over the past 10 years so he can certainly afford his own place and pay someone to find a home for him.

The bottom line, and the one no one with the Buccaneers is willing to admit is that wide receiver Chris Godwin has been hurt and the last time AB played a full season in 2018 he led the NFL with 15 receiving touchdowns.

In sports, as we well know, it doesn’t matter how horrible a human being you are off the field (or in the locker room), as long as you can produce on it.