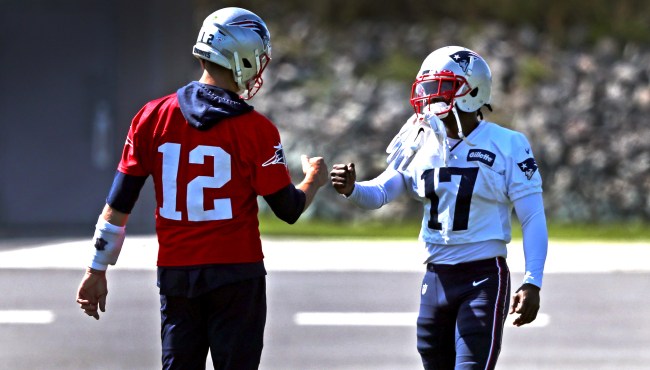 Almost as soon as the Tampa Bay Buccaneers signed oft-troubled wide receiver Antonio Brown on Friday evening, NFL fans wanted to know what quarterback Tom Brady had to do with the signing and what he thought about reuniting with the 7-time Pro Bowler.

On Sunday, Bucs head coach Bruce Arians dubiously claimed that TB12 had nothing to do with the signing of Brown, despite multiple reports that Brady was the driving force behind the move. No one believed him.

Brady also spoke to the media on Sunday following Tampa’s 45-20 win over the Raiders and, naturally, the topic of the Brown signing came up.

Here’s what he had to say…

“I’m not getting into personal conversations that we’ve had together,” Brady told the media. “So the guys we have are amazing players and teammates – Mike, Chris, Scotty, Tyler, who caught a touchdown today, JWatt, Cyril, Mick, and the tight ends, Huddy, Gronk, and Cam, obviously. They’re all doing a great job. We miss O.J. out there. We have a great group, and we’re all expected to go out there every day and help the team win, and that’s what we’re trying to do. We’re trying to win football games. We’re trying to do a job.”

Seeing as how Brady completely avoided talking about Brown with that response, Tom was then asked point blank, “How much influence did you have in him coming here and how would you describe Antonio as a player, and also as a person? He’s had some disturbing allegations against him.”

“Well, he’s a tremendous football player,” Brady replied. “I played with him for a brief period of time so I’m looking forward to working with him again and seeing what role he can come in and, he’s a very hard-working guy. Again, we’re all going to go out there on the practice field and do the best we can do, and we’re going to see how it all fits together so… there is a lot of hard work ahead. None of it magically happens. I think we realized that early in the season when we put a lot of new people together.

“We’ve got to figure a lot of things out in a short period of time. We’re fighting against a lot of continuity from a lot of other teams, a lot of other coaches. Bruce has had tremendous patience with me, watching me grow in the offense. I totally appreciate that and respect that and I feel like I am getting to a more comfortable place. He’s been a great mentor to me in the short period of time. Byron and I are growing in our communication and that’s what it takes for a good football team to work it every day and try to be better every week. And that’s what we’re going to try to be.”

Bruce Arians originally was't interested in bringing AB to Tampa, but changed his mind due to injuries in the Bucs WR corps.@JayGlazer breaks down how the move happened: pic.twitter.com/i5wruSo1EA

Meanwhile, as Brown is about to suit up in the pewter and red, the NFL is still monitoring his legal situation as there is still a civil sexual assault lawsuit still pending against him that is expected to go to trial sometime in December.

“We are monitoring developments and we will evaluate any additional information that we receive that bears upon whether these allegations are supported by sufficient credible evidence to find a violation of the Personal Conduct Policy,” an NFL spokesman told PFT by email on Sunday. “If a further violation is found, he would be subject to discipline at that time.”

Arians on the allegations from women against Antonio Brown: "Let the court system do its job." Said he's been around a lot of players facing allegations. "If it's found out to be true, he won't be with us."

I asked Cam Jordan what he thought about facing Antonio Brown in Week Nine on @SNFonNBC. Said Jordan of Brown, "He's got to get to Week Nine."