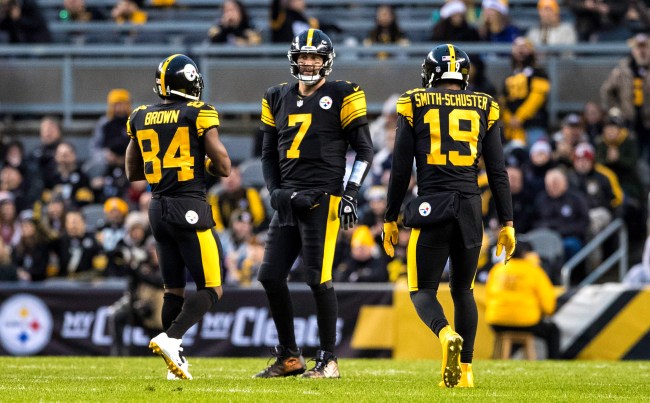 As we have seen repeatedly since Antonio Brown left the Pittsburgh Steelers, he and the team’s quarterback Ben Roethlisberger weren’t exactly the best of friends.

The list of clashes between the two football stars goes on and on and on.

Roethlisberger didn’t appreciate Brown throwing tantrums and his poor route running, Brown said Ben is racist, has an owner’s mentality, and is a loser. AB later apologized for that last one.

So, despite the fact that Brown was arguably the best wide receiver in the NFL when he was playing for the Steelers, Big Ben understandably has shown no signs that he misses him.

This was once again evident during a video conference call Roethlisberger had with media on Wednesday.

Roethlisberger gushed about the “selfless” attitude JuJu Smith-Schuster displayed in the wake of rookie receiver Chase Claypool’s big game. Of all the Steelers pass-catchers, Smith-Schuster has a resume most identified with that as a No. 1 receiver — and that is a designation Roethlisberger has at times had well-documented issues with navigating (see: Brown, Antonio).

“There’s definitely more to it than everyone understands,” Roethlisberger said when asked about keeping his skill-position talent happy. “Maybe someday I’ll write a book and talk about it. It’s not always easy. I feel for other quarterbacks sometimes.”

Smith-Schuster had just four catches for 28 yards on five targets this past Sunday. After the game, Roethlisberger said he was a little concerned that JuJu, who had 111 catches in 2018, would be upset that Claypool and Ray-Ray McCloud had more touches than him in the Steelers’ 38-29 win over Jacksonville.

“You know, it’s interesting because when I came to the locker room after this last week I wasn’t sure what the demeanor was going to be from the other receivers to be perfectly honest,” said Roethlisberger. “And I looked over, because obviously Chase had an amazing day [scoring 4 touchdowns], and I looked over at JuJu to kind of see his reaction because he is our number one receiver and I looked over at him and he had the biggest smile on his face.”

“And it’s not because Chase was right there with him,” he continued. “Chase wasn’t even next to him. He had the biggest smile, he was having fun with other guys. I just can’t say enough about him and what that meant to me and what that meant to other guys and how proud we are of him that he truly was happy for Chase. He was happy that we won the game. Did he have huge stats? No. But we won the game, and that’s all that matters.”

“I think for a number one receiver to feel that way in the locker room, I just told my wife about it, I told my closest friends about it, that just made me really proud and happy that we have selfless guys on this team that are more about the win than they are trying to get their stats,” Roethlisberger added. “I can’t say enough about JuJu and what that meant after the game.”