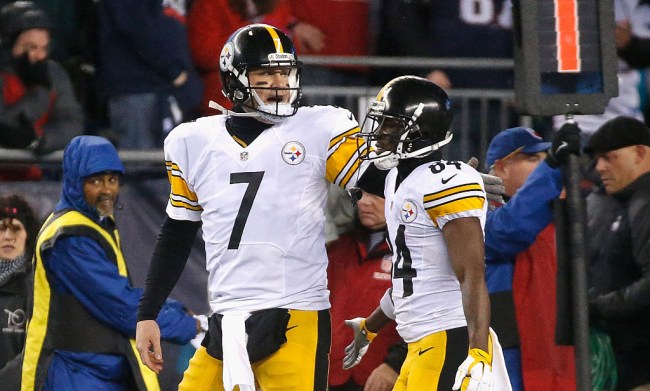 As you may have seen on Sunday, Steelers Pro Bowl wideout Antonio Brown threw quite the hissy-fit on the sidelines during the game versus the Ravens. It was really quite the spectacle with Brown even throwing a Gatorade bucket at one point.

Considering that the Steelers won the game pretty handily, 26 to 9, throwing a fit like that could be taken as being a little selfish by some. Like, say, Brown’s quarterback Ben Roethlisberger, for instance.

Speaking to 93-7 The Fan, Roethlisberger had this to say about the incident…

“He got upset because he was open, which I can understand, sometimes that happens…it’s not like I intentionally missed him, it’s not like I intentionally didn’t throw it to him. I was doing what my reads tell me to do, I don’t even want to say I made a mistake, because I was reading the side I was supposed to read. It’s just unfortunate that it happened, and it’s unfortunate that he acted and reacted that way.”

“I told him on the sideline, ‘AB, just come talk to me, ask me what happened, tell me that you were open.’ You know, if that were Heath Miller, I’d probably ask Heath on the sideline, ‘Hey Heath, were you open?’ and he’d probably tell me ‘No,’ because he wouldn’t want you to feel bad, that’s just who he was…that goes a lot further than throwing a temper tantrum.”

From the looks and sounds of it, Brown was pretty inconsolable…

“We all try to talk to him and it didn’t help. I think it’s bad in the sense that we have a lot of young guys that see that too. Juju [Smith-Schuster] sitting right next to him and looking at that, and what’s Juju thinking? Is he thinking that it’s ok to act that way? I don’t know.

“I don’t know that he needs to react that way. He’s super human on the football field and when that happens, it almost brings him back to being a mere mortal if you will, because it gets in his head and it just messes with all of us a little bit.”

While Roethlisberger claims he isn’t calling Brown out, he did say that his tantrum is “causing a distraction that none of us really need.”

Sounds like he’s calling him out to me, but what do I know?

Guess Brown got the message, huh?