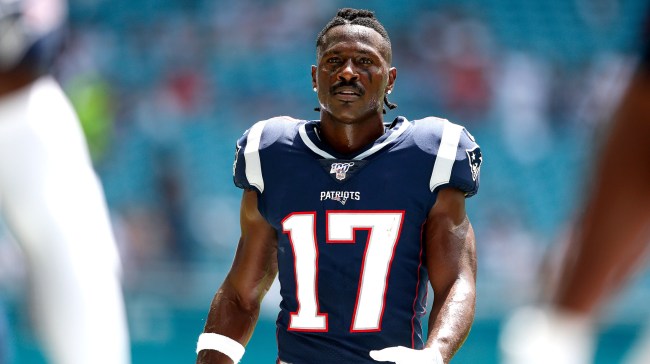 As pretty much every NFL fan is well aware, wide receiver Antonio Brown was suspended by the league for the first 8 games of the 2020 season due to “multiple violations of the league’s personal conduct policy.”

Among those “mulitple violations” was a civil lawsuit filed by his former trainer Britney Taylor alleging she was sexually assaulted by Brown.

The last time we heard anything of note from AB was right after his suspension was announced when he posted a message to social media, writing, “I look forward to new beginnings. I want to be the best version of myself on and off the field, and I will do my best to be a great teammate. I appreciate the NFL giving me the opportunity to continue to work on myself and improve.

“I am thankful and grateful for this opportunity to play a game that I truly love and I look forward to joining a new team soon. Thank you to my family and all those that have supported me. I will show the fans my appreciation for this second chance by having the best season of my career.”

Three weeks into the season, with reports of the Texans being interested in signing Brown once his suspension is lifted (they’re not) and several other teams reportedly “monitoring” and “evaulating” Brown, comes news that one of Brown’s attorneys has withdrawn from representing him in the Britney Taylor civil case just one day before a significant court deadline.

One of free-agent WR Antonio Brown’s attorneys, Carson Hancock, withdrew tonight from the civil case filed by a woman who has accused Brown of rape and sexual assault – one day before a judge’s deadline for Brown to turn over text messages and other evidence.

Hancock -- who also represented Brown in his felony burglary and assault/battery case -- cited “irreconcilable differences” for his decision to withdraw from the civil case. The trial is set for December. Brown is serving an eight-game NFL suspension for two unrelated matters.

Attorney Carson Hancock had represented Brown since last September and served as his lawyer for the burglary and battery charges related to the wide receiver’s altercation with a moving truck driver to which he pleaded no contest to in June.

Brown’s agent Drew Rosenhaus also terminated his relationship with the troubled NFL star back in January.

The NFL reportedly stated when it suspended Brown that they reserved the right to extend the punishment even longer than eight weeks if further violations were brought forth in relation to the civil suit with Taylor.

At this rate, we may have officially seen the last of the 32-year-old wide receiver playing in the NFL.