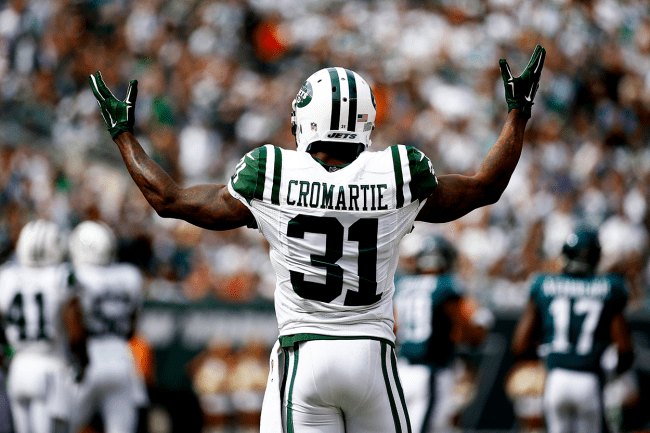 If there is anyone who knows how to play cornerback, it is Antonio Cromartie. Now he is teaching the future at his former position and his Twitter rant over the weekend has ruffled a lot of feathers within the coaching community.

During his 11 years in the NFL, Cromartie was a four-time Pro-Bowler and a First-team All-Pro. He led the league in interceptions in 2007 and recorded 416 total tackles with 116 pass deflections, 31 interceptions, and even scored six touchdowns.

Today, Cromartie serves as a graduate assistant with Texas A&M. Obviously, he works with the cornerbacks.

Over the course of the Memorial Day weekend, Cromartie took some of his teachings to Twitter. There were quite a few coaches who did not agree and pushed back at the NFL veteran, but… well… the guy who spent more than a decade in the league probably knows what he is talking about.

Cromartie explained that cornerbacks should not be spending as much time focusing on keeping outside leverage on receivers.

If you a DB at any level. Understand this 92% of the routes are in breaking routes so why play outside leverage and with your ass to the sideline. Only time I want to be outside is Tight split, bunch and stacks. Study the route tree and what teams do 2×2 and 3×1. This will help

The hardest throws for QB’s at any level are out breaking routes. (Corner route, comebacks and outs) 9 ball you can squeeze the WR to the sideline. There’s so much to learn playing this position. Get back to the basics and build a good foundation with your techniques

Even when people tried to push back (for some reason), Cromartie explained why they were wrong.

Not true because most comeback come with QB out of pocket. And if the corner is on top the route it’s easier to read. If he’s underneath he’s beat dump.

He continued further to double down on his inside focus, explaining that cornerbacks must trust their technique and keep their eyes disciplined.

And understand this young DB’s when he stems you inside doesn’t jump further inside stay where you are and your leverage will change to head up to to slightly outside and you are perfect position to break on every route. Trust your technique and your eyes have to be discipline

Cromartie then went on to say that he knows this because he not only played in the NFL, but because he learned from some greats along the way. Anyone who coaches players to keep their butts to the sideline are wrong, he said.

And y’all know this I was taught by some great teachers. From college to the league. Taught me and molded me to who I am as a Today. I’m not the one who will sugar coat anything with players or Coaches I’m going to speak my mind.

Coaches think oh if we play with butt to the sideline we have better vision on the QB. Well first you teaching bad habits. Or it’s easier to get to your divider easier. I can pedal and turn and get to my divider also.

After Cromartie received a lot of pushback overnight, he returned to Twitter to let people know that he doesn’t care what they think, because he is right. He is focused on developing kids to play on the next level.

I see I have touched a lot on peoples nerves. And guess I don’t give a you know what. What most y’all don’t know is y’all are hurting kids. B/c some of these major college don’t develop kids. They put them some drills and say go play. Develop your players.

Got coaches on here talking I’m creating resentment and going from the DC Philosophy. DC probably never played football or only played HS football. And has a college DC trying to teach a defense. And doesn’t know to adjust accordingly to his players strengths so they have success

Cromartie then continued to provide some more detail into what he is teaching.

Understanding routes combinations and down & distance is important. Like 3rd down. I like to break down 3rd&2-5, 3rd&6-9 and 3rd&10+. Gives a lot of info. On what OC’s like to do. And who are the biggest targets on this D&D

To close things out, Cromartie finished his Twitter session by saying that he may not have all of the answers. However, he knows a thing or two about the position and applies what brought him success to how he coaches.

And look I’m not saying I have all the answers, but my 11 years of playing experience and seeing things differently than coaches account for something. And I apply that to how I coach. And I try to understand what each one of my players do well and things they don’t. N develop

Now, who would you trust: an 11-year NFL cornerback with one of the most recognizable names at the position? Or a random coach who maybe played high school ball?