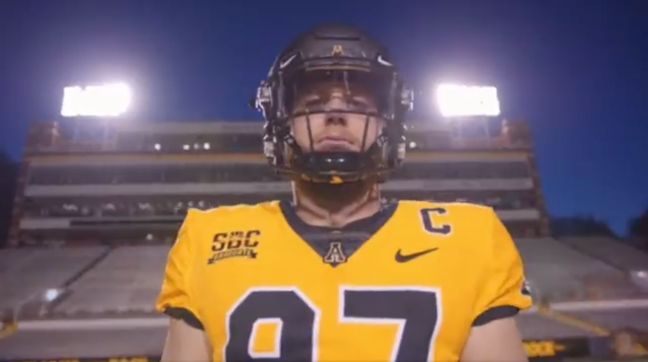 If you don’t know about the stuff that Max Renfro and the video team at Appalachian State are putting out, let me put you on. As the Mountaineers gear up to host South Alabama on Saturday, the team gave a tribute to Heroes that will make you shiver.

On Veterans Day, App State honored the fire and police departments, medial workers and veterans with its weekly uniform reveal. The video is special.

If you are not a “college football person,” a uniform reveal is exactly that. A team announces what uniform combination it will wear in the upcoming game, typically a few in advance.

As social media becomes increasingly important in society, as the case in college football. Image has become a point of emphasis over the past few years and visuals on social have become crucial.

To keep up in recruiting, you have to be able to look good online. Schools are investing more money each year into the graphics and video departments for good reason.

It allows creatives to create videos like this. Renfro and co. did a phenomenal job of presenting gratitude for those who put their lives on the line for us.

Featured in the video:

“They wear their uniforms so we can wear ours.”

Here is a breakdown of how it was made:

This week’s breakdown⬇️ Huge thanks to @lgware & JR for getting me in contact with the heroes featured in the video. https://t.co/IMvtnEQvqv pic.twitter.com/JQ3L1CR8oQ

Nebraska released a uniform reveal ahead of 9/11 that is also worth watching today and every day.

I would like to reiterate something that comes at the end of the Mountaineers’ reveal. Take a moment to pause, think, pray and thank a hero today.