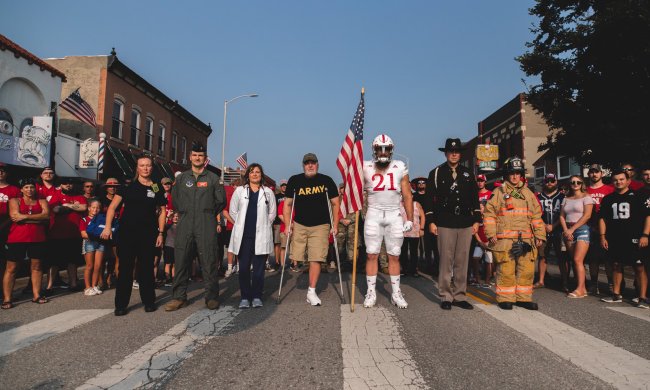 In honor of the 20-year anniversary of 9/11, Nebraska football is wearing commemorative camouflage jerseys this weekend. To announce the alternate uniforms, linebacker and former Navy Seal Damian Jackson joined local service members and first responders for a video that will send chills down your spine.

Jackson, a 29-year-old Redshirt Senior, walked on to the Cornhuskers program in 2017 and his story is remarkable.

Who is Damian Jackson?

After high school, Jackson followed in his brother’s footsteps and enlisted in the Navy. At 6-foot-2, 270 pounds of pure muscle, Jackson eventually became a part of an elite SEAL platoon.

He took on the role of Lead Breacher, while specializing in explosives and obstruction removal. If a barricade needed to be torn down, a wall needed to be crumbled or a door needed to be blown off, it was Jackson’s responsibility.

After two deployments, Jackson felt that his career as a SEAL was coming to a close. He dreamed of playing college football. Although he had never played the sport before — on any level — he wrote to every Division-I college football program asking for an opportunity.

The Nebraska Cornhuskers gave him a shot.

A hero, a scholar and an athlete.

Jackson received the opportunity to walk-on as a defensive lineman upon arriving in Lincoln. Jackson earned time on special teams as a sophomore and made two tackles in two games.

After earning his way onto the field as a junior, he was placed on scholarship prior to the 2020 season. Jackson was part of the team’s rotation at outside linebacker during the first game of 2021 and recorded a solo tackle.

In addition to his hard work on the field, Jackson is also a three-time Academic All-Big Ten player. He is a hero, a scholar and a Division-I athlete.

For Jackson to be apart of this weekend’s announcement was special. The moment when he takes his helmet off to salute the man in uniform is truly emotional.

Nebraska plays the University at Buffalo on Saturday and the game means more for Jackson and his teammates.