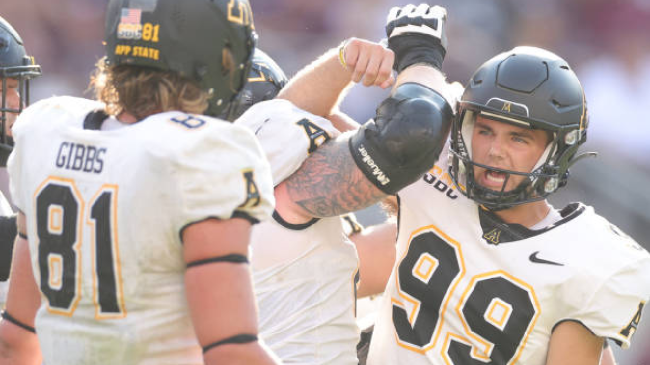 For a little while there, it looked like Appalachian State was going to fall victim to a letdown week after taking down Texas A&M last Saturday.

Following the huge upset win, the Mountaineers welcomed the Troy Trojans and College GameDay to Boone, North Carolina. This week, the script had flipped with the Mountaineers seen as the heavy favorites against an opponent that lost their season opener to a Power 5 opponent.

Luckily for fans, the matchup with Troy provided a whole lot more offense than the win over Texas A&M and it was a game that went back and forth from start to finish. Late in the game, it even looked like Troy had Appalachian State on the ropes. Trailing by 4, the Mountaineers turned the ball over on downs with 1:13 left in the game and only 2 timeouts.

The Mountaineers were able to stop Troy from getting a first down to run out the clock and were set to get the ball back on a Troy punt with 25 seconds left. That’s when this game took an odd turn.

Troy decided to take a safety on 4th down instead of punting, meaning the Mountaineers only trailed by 2 and could potentially kick a field goal to win.

Ending of matchup between Troy and Appalachian State was absolutely insane

Troy then proceeded to go with a squib kick instead of sending it deep, allowing the Mountaineers to start their drive from just inside their side of the 50 with 13 seconds left.

It somehow looked like the plan was going to work for Troy as the Mountaineers weren’t able to complete a pass on the first 3 plays of the drive. Then magic happened.

With 2 seconds left on the clock, Chase Brice dropped back to launch a hail mary. The pass was batted down short of the goal line, but ended up in the hands of an Appalachian State’s Christian Horn who took it into the end zone for a wild 4-point win.

Appalachian State has easily been one of college football’s most entertaining teams through the first 3 weeks of the season.