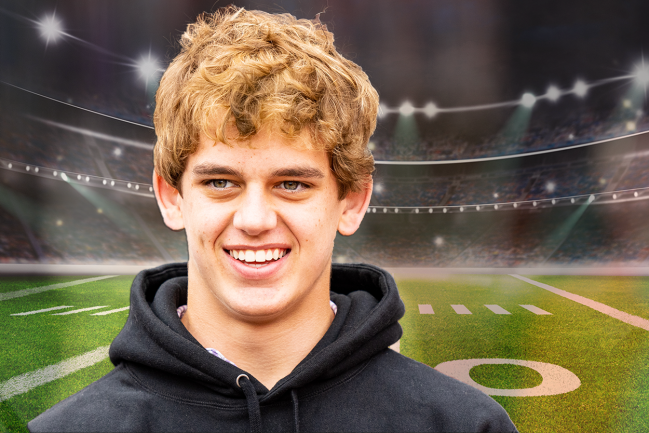 The nation’s No. 1 college football recruit is back on the gridiron. As Isidore Newman High School football took the field for spring practice on Monday, Arch Manning got in his first on-field reps of the 2022 season with multiple coaches in attendance.

As Manning’s recruitment continues, it is believed to be a two-school race. That didn’t stop Alabama offensive and defensive coordinators Bill O’Brien and Pete Golding to stop by New Orleans for the first practice of the year.

Staffers from LSU, Tulane, Louisiana Tech and Virginia were also in attendance as things got underway.

Coaches from Alabama, LSU, Virginia, Tulane, Louisiana Tech and more in attendance for day one. pic.twitter.com/jg1PRNfvos

As was the media.

This is what it looks like on day one for the nation’s top player. pic.twitter.com/3DiXwt64W6

Of course, the afternoon started by getting loose.

From there, the Greenies broke out into individual position group sessions and Arch Manning got to throwing.

Of course, he looked right to his favorite target, tight end Will Randle, who is also considered a Texas lean.

Arch Manning to Will Randle pic.twitter.com/QLW5B8O4qq

After getting warmed up and comfortable, Manning started to sling it. At first, he stayed close to the line of scrimmage.

And then he opened it up downfield.

Manning’s best throw of the day came on a ball to the sideline where he dropped it right into the hands of his receiver just before he stepped out of bounds.

Following the first spring ball session of the year, Manning was asked about his recruitment. He is considered to be down to Texas, Georgia and Alabama with the former two pulling away from the Crimson Tide and the Longhorns out in front.

Manning said that he has a lot of time to figure out what’s next. There is no clear timeline for a decision.

Arch Manning was asked about his timeline for a commitment: "I got to figure that out."

Texas, Alabama, Georgia, and a few other schools still in the mix for the Newman Greenie QB. pic.twitter.com/Tm7ByCyyq2

Isidore Newman will continue spring practice through the rest of the week. Surely there will be a few more coaches who swing by.