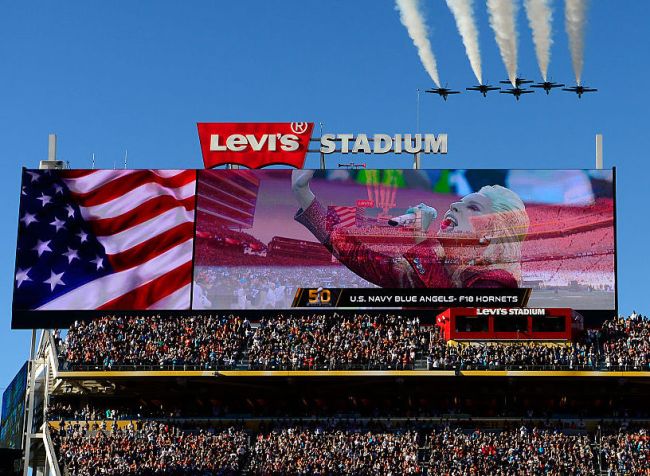 On Monday afternoon, Media Twitter was whipped into an absolute frenzy when New Yorker staff writer Jeffrey Toobin found himself on the receiving end of a suspension following what was quickly dubbed the “Dick Zoom” incident after failing to realize his camera was on when he decided to unveil a part of his anatomy that is traditionally frowned upon showing off in a work meeting (virtual or otherwise).

Shortly after the news of this “Hot Camera” moment broke, Defector (a.ka. New Deadspin) tweeted out a hot mic moment that was captured prior to Sunday’s contest between the Packers and the Buccaneers when four A-10s made their way over Raymond James Stadium. Joe Buck sarcastically opined “That’s your hard-earned money and tax dollars and work” and Troy Aikman asserted it’s unlikely we’ll continue to be treated to them if Joe Biden becomes the president.

Bitching about flyovers is certainly nothing new, as many sports fans have routinely criticized the military for needlessly wasting government funds on them  and some have gone as far as to label them “propaganda.” For The Win made the claim that the stunts are “needlessly expensive” while linking to an article Darren Rovell wrote close to a decade ago, but that assertation illustrates a widely-held misconception and I can’t think of a better excuse than this recent mini-scandal to debunk it.

Before I continue, I want to stress that I’m not defending the practice as a whole, as the aforementioned Rovell article was penned following after a fleet of F-18s made their way over the Dallas Cowboys’ stadium during the Super Bowl while the roof was closed, which I think most people would agree is pretty absurd. A representative from the Navy revealed the showcase had cost $109,000 worth of jet fuel but added it the branch had “gained some recruiting points,” which you can’t exactly put a price on.

It’s no secret that the military has had a long relationship with the NFL when it comes to acts of patriotism in the form of not only flyovers but elaborate national anthem ceremonies and the “Salute to Service” jerseys players occasionally don to pay tribute to the troops. In 2015, a Senate report revealed the Department of Defense paid the NFL millions of dollars between 2011 and 2014 for what was dubbed “paid patriotism,” and the following year, an NFL audit determined the league had improperly used $700,000 worth of taxpayer money it opted to return.

The discovery resulted in a law being passed that banned the government from continuing to devote funds to this particular practice, but as evidenced by Sunday’s flyover, their relationship has been anything but severed. As a result, both sides have continued to come under fire for wasting taxpayer money, but the issue isn’t as cut-and-dried as many people seem to think.

Pilots for various branches of the military are expected to fly a certain number of hours every month for the various training exercises they engage in. These missions are routinely conducted at bases around the country, meaning Americans are still paying for them whether they take place over virtually unpopulated areas or stadiums that have traditionally been home to tens of thousands of people.

As the above statement from the spokesperson shows, the military has no qualms when it comes to admitting the tactic is used to lure potential enlistees, and when you consider the planes will be taking to the sky no matter what, it’s hard to blame them for conducting drills that assist pilots in arriving at a certain location at a specific time while also getting some free publicity.

Finally: flyovers are dope as hell.

For 35 seconds politics didn't exist. We saluted the flag, watched a bald eagle swoop in, and the Ospreys flyover was awe inspiring. pic.twitter.com/XXzkggfGOH

If you’ve ever been at a game and seen a squadron of jets zoom past at the exact moment the anthem singer starts belting out “FREEEEEEEE” and your first thought was “Ugh, our tax dollars hard at work,” there’s probably nothing I can say or do to change your mind. However, I can only hope this article might make you reconsider that stance.