Comedian Ari Shaffir Joyfully Celebrates Kobe Bryant’s Death In Ruthless Instagram Video, It Does Not Go Well For Him 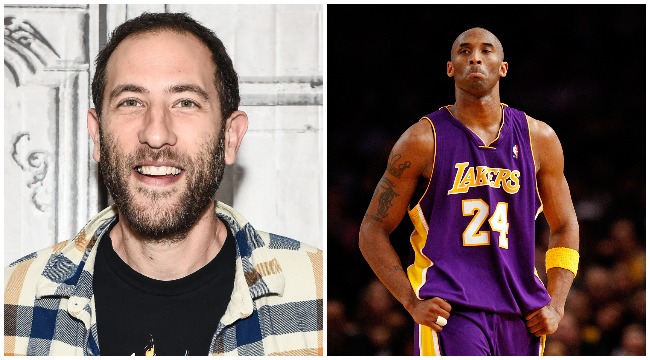 There are so many awesome Kobe tributes floating around that it feels unnecessary to shine light upon the bullshit (Cc: Evan Rachel Wood), but this take by comedian Ari Shaffir deserves a public flogging.

Fresh off of drugging his good friend Bert Kreischer, Shaffir decided to pay tribute to the life of Kobe Bryant, his 13-year-old daughter, and the seven other victims who died in a helicopter crash Sunday morning by announcing the “good” news outside Charlotte’s Spectrum Center (the home of the team who drafted Kobe before trading him to the Lakers).

Oh, and less than six hours after news broke of the tragedy, Shaffir followed up with this doozy. 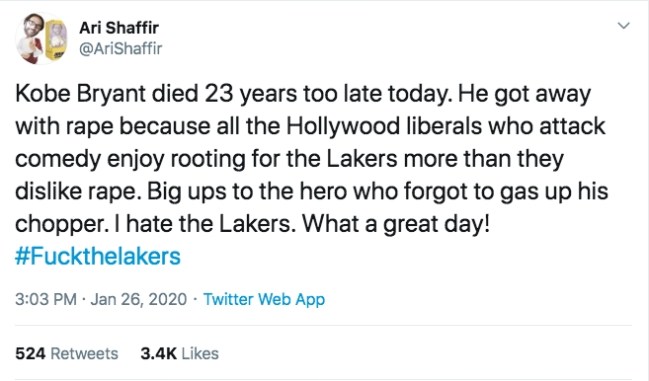 Shaffir, who is best known for his frequent appearances on the Joe Rogan Experience and punching Bobby Lee in the face over a girl, followed this tweet up claiming he was “hacked” and made his account protected, but that is difficult to believe when you consider how critical of Kobe he’s been over the years.

As Heavy points out, on January 1, 2020, Shaffir joked that late NBA Commissioner David Stern was “in the room when Kobe raped that chick in Denver. I’m glad he’s dead.”

In April 2016, Shaffir tweeted, “Hey feminists of LA, How come you’re giving Kobe Bryant a free pass on that rape? This is a serious question. Have some balls for once.” While in February 2015, Shaffir tweeted, “Bill Cosby and Kobe Bryant are pitching a show called “Lay Down or Fight.” It’s an Odd Couple type show about their different rape styles.”

Oh, he also commented “Such great news!!! #fuckthelakers” on Bert Kreischer’s Instagram tribute to Kobe. Reminder: we’re talking about the death of nine people, including a 13-year-old girl.

Shaffir’s fans have come to expect his untimely celebration of death as a schtick he’s been doing for years, regardless of his feelings or even knowledge that the person exists.

In the wake of backlash, Shaffir posted a note to Instagram explaining there was no malice behind the video, and that he, too, believes that innocent people dying tragically is bad.

Needless to say, regardless of the explanation, Shaffir’s take got him into some problems online.

The real comedy is how those attuned to Ari's shtick are acting like this is comedy gold. Beyond cringe.

Any idiot can spew shock factor material to trigger the internet during a moment of sensitivity. It's trolling 101.