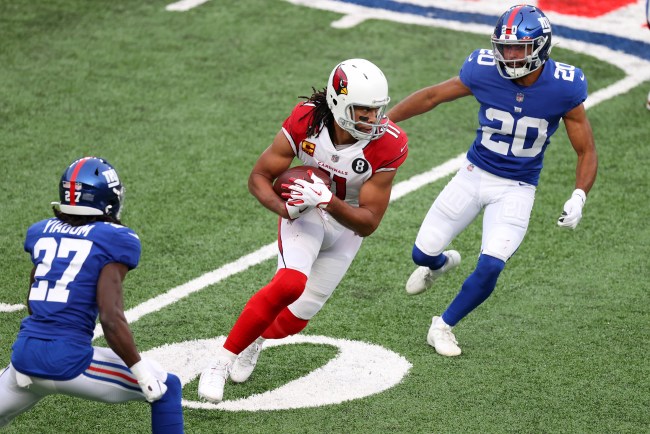 The Arizona Cardinals were dealt a major blow today when it was announced that DeAndre Hopkins would miss the rest of the regular season with a knee injury. Now fans are hoping that Cardinals legend will return in his absence.

Larry Fitzgerald was hoping to re-sign with the Cardinals this offseason, but when they signed AJ Green and drafted Rondale Moore, they no longer had room for him on the roster. He has kept the possibility open that he would still play this year and now it looks like an opportunity has presented itself.

It comes as no surprise that Cardinals fans are favor one of Arizona’s favorite athletes making a comeback.

This changes everything. DeAndre Hopkins is expected to miss the rest of the season.

Hi @LarryFitzgerald! You busy the next two months?

Help us @LarryFitzgerald you're our only hope

-The State of Arizona pic.twitter.com/zF1DFnY86P

DeAndre Hopkins getting a second opinion on his knee after an MRI can only mean one thing….. it’s time #RedSea @LarryFitzgerald pic.twitter.com/zgxOjPDxWE

He might not be the player he once was, but Larry Fitzgerald could still have enough in the tank to help out the Cardinals down the stretch.

Fitzgerald is 2nd all-time in receiving yards and receptions in the NFL.

Personally, I hope he does come back. Fitzgerald returning to lead the Cardinals to a Super Bowl that he so badly deserves would be a great story.