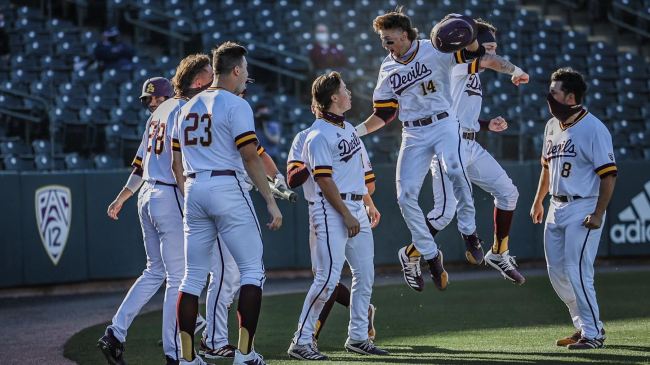 Arizona State and Cal State Fullerton baseball had a lot of bad blood during their three-game series this weekend. The Sun Devils play extremely loud and put a 10-0 beat down on the Titans on Friday, hitting three home runs in the game. After the second and third dingers of the day, both hitters got a long look at their shots and bat-flipped accordingly.

Redshirt freshman Sean McLain was the first to get in on the party and hit a solo shot in the bottom of the fifth. It took him awhile to get out of the batter’s box and he stared down the left-field bomb while flipping his bat during his trek down the first base line. Remember his name, it will be important.

Two innings later, 6-foot-6 (!!) Allbry Major hit a two-run blast a million miles to extend the lead to 10. He took his sweet time down the line and tossed his bat with the utmost swagger.

The home team went on to win the first game of the series, but fell behind 3-0 to begin the game on Saturday. Let’s first take a moment to appreciate the Sun Devils uniforms and how beautiful they are.

Arizona State was able to battle back with help from a two-run blast, and McLain got back up to the plate in the bottom of the eighth, looking to add to a 5-4 lead. Apparently, Fullerton did not appreciate the bat-flip performance on Friday and threw at his head with the first pitch of the late-inning at-bat. On the very next pitch, McLain stepped back into the box and went deep. Poetic justice.

Big Sean ain't having it.

Arizona State is 10-2 on the season and not too far outside of the Top 25. If they keep playing with swagger like this, the Sun Devils will be back at a Regional come June. It’s just another reminder that college baseball is the best.