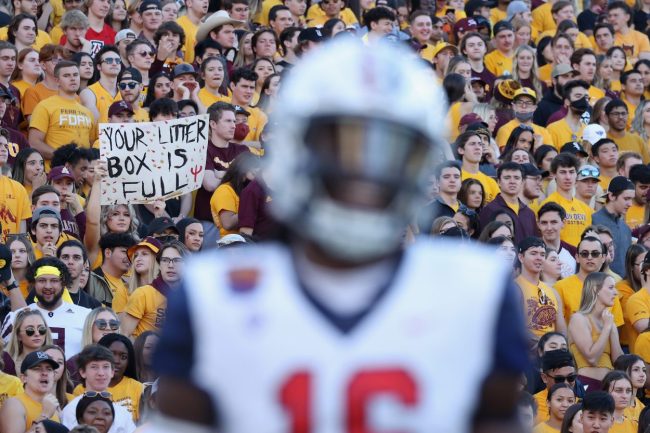 When somebody says that something is “nothing personal,” it is usually pretty personal. That is certainly the case in Arizona.

Earlier this week, the two in-state college rivals had things turned up a notch. The University of Arizona is located in Tucson, while Arizona State University is about two hours north in Tempe.

That didn’t stop the Sun Devils from making their mark on opposing territory.

In recent years, ASU has owned the Duel in the Desert. The Sun Devils have won each of the last five meetings between the two and all-but one win has come by more than a touchdown.

To remind Arizona of their recent triumphs, Arizona State put up a billboard right out of Tucson. Although it says that it’s nothing personal, it very much is.

When the two play one another, the victor is awarded with the ‘Territorial Cup.’ On the billboard, five outlines of the Cup display the scores from each of the last five years, all of which went against the Wildcats.

Underneath, the billboard states that there is “no pity for the kitty,” meaning that the Sun Devils have no pity for their recent beatdowns.

While putting up a billboard in or just outside of a rival’s town is fairly common amongst college sports, ASU took it up a notch. Now, whenever someone leaves or enters the city, including prospective recruits, he, she or they is reminded of the recent Arizona losses.

Although Arizona currently leads the all-time series 49-45-1, Arizona State is only four wins away from tying the series, and clearly they don’t want the Wildcats to forget. Savage.