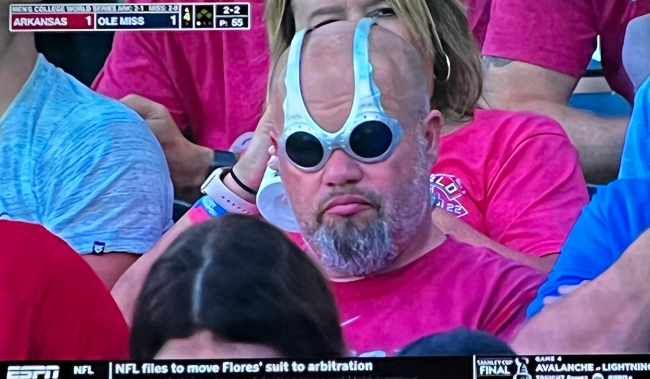 As Arkansas baseball made an incredible run to the College World Series, Kendall Apple has not missed a game. The school’s fanbase is known to travel in force to away games in all sports, but the diehard baseball fans take things to the next level.

Apple is one of those fans and he’s hard to miss.

With a Razorback tattooed on his left forearm and a miller light in his hand, it is his sunglasses that really make him standout. Apple, who rocks an incredible goatee, is completely bald.

Atop his head, at every game, he dons a pair of Oakley Over The Top FMJ sunglasses. They look like something out of The Matrix.

The glasses, which were discontinued a few years back, are very unique. They’re awesome, especially as the final accouterment to complete Apple’s look.

However, because they have not been produced for quite some time, they are extremely rare. To find them today is not an easy task and they typically sell from anywhere around $800 to $2,000 on the resale market.

Obviously, the glasses are unlike any others in the ballpark. As a result, Apple is often a focal point of the broadcast during pitching changes or slow moments in play. That has certainly been the case during this year’s College World Series.

By all accounts, from everyone who has interacted with Apple, he is a fantastic, stand-up guy who loves having fun and loves his Hogs. He recently provided an inside look at his travel van, which he calls the ‘Woo Pig Van,’ and spoke about how the glasses have become a staple.

In the process, he provided a look at his tan line from sitting out in the hot Omaha sun all day while wearing his Oakleys and there is a rather significant color difference between where his glasses sit and the rest of his head.

What a tan line pic.twitter.com/EzhuqameVV

Though Arkansas’ fanbase can often get a bad rap, Apple is the type of guy that can carry the rest of his fellow Hogs. His passion is evident, his kindness is clear and his look is downright legendary.