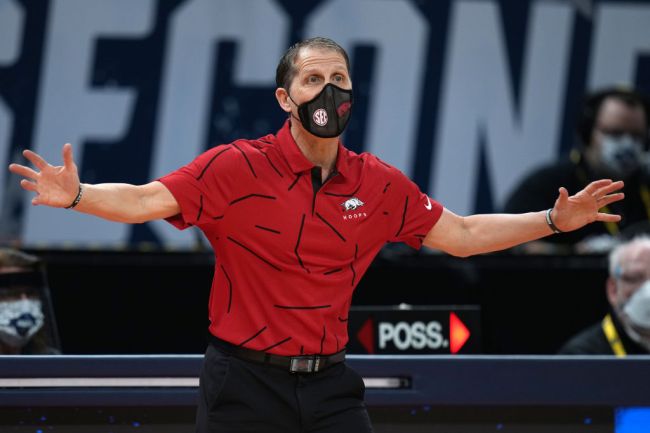 For the first 15 minutes of the second game of March Madness, it looked like the No. 3-seed Arkansas was in trouble against No. 14 Colgate. The Raiders opened up a 33-19 lead to put the nation on upset watch, but that lead quickly evaporated as the Razorbacks went on a 17-0 run before halftime and took a 36-33 lead into the locker room.

Colgate came into the game with a 14-2 record and a top-10 NET ranking, so the opening run wasn’t a surprise to anyone who watched the private liberal arts school from New York play during the regular season. Even the school got a little cocky prior to the game. Back when the matchup was announced on Selection Sunday, the team’s Twitter account called back to 2006 March Madness, when Arkansas was upset by Bucknell, another Patriot League opponent.

It was all in good fun, and I am a big proponent that more smack talk is always better than less. However, the result did not go their way and Colgate went on to lose by 17. Woof. Arkansas’ social media team took note of the previous tweet and fired back with a ruthless response. At some point throughout the week, head coach Eric Musselman played into the name of his opponent and squeezed a tube of toothpaste in the locker room, referencing that his team needed to “squeeze Colgate.” The Razorbacks were quick to put their foes in place and replied directly to their account after the win.

If this is your first introduction to Musselman and his greatness, welcome. The 56-year-old has coached on both the collegiate and professional level at more than 15 teams. He most recently built Nevada into a NCAA Tournament powerhouse before heading south to the SEC, and he brings an insane amount of energy to each one of his stops. Musselman is completely jacked all of the time.

And he doesn’t take any slack from anybody.

Daymeon Fishback made a comment at the end of the Mississippi State game last night, Eric Musselman heard it and he had a rebuttal… pic.twitter.com/RCdi78Xqbr

Eric Musselman: "I just think that this group, we don't really fear anything." pic.twitter.com/ZYV0KiYKBU

Musselman’s team will play Texas Tech in the second round this weekend, and his mother is sure to have some thoughts after the slow start. She frequently watches practice tape and reports back with hand-written notes, which is so awesome. The Hogs continue to dance.