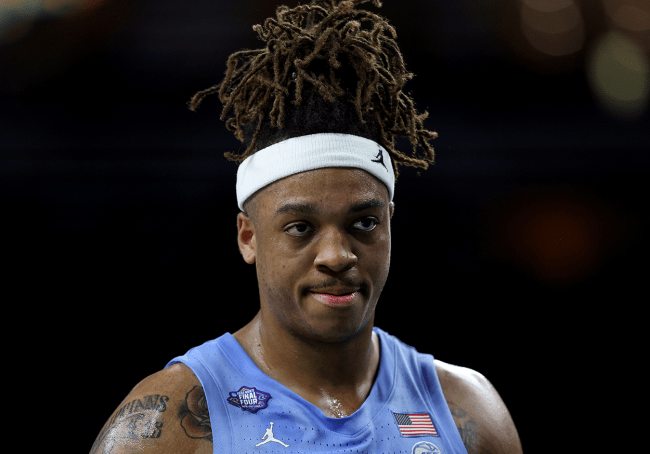 North Carolina’s leading rebounder and most important big man Armando Bacot Jr. injured his right ankle on Saturday night. During the second half of UNC’s historic Final Four win over Duke, Bacot went down in excruciating pain but was able to return and had an incredibly relatable reaction.

Bacot rolled his ankle with 5:18 remaining in the game and spent more than two full minutes laying on the ground near the baseline. He was ultimately able to limp his way to the bench with help from two teammates, but it didn’t look promising that he would be able to get back in the game.

He was in a lot of pain.

However, after a few minutes talking to trainers, Bacot left the bench area and ran up the tunnel, appearing to head to the locker room. Instead, just moments later, he turned back around and ran back to the court where he was able to check back in with 4:36 on the clock.

As Bacot stood on the sideline, the camera caught him give a two word reaction to returning. He shook his head and shrugged his shoulders as if to say “there is no way I’m not playing right now” and mouthed the words “f**k it.”

Bacot ultimately pushed through limitations and played out the rest of the biggest game of his career, helping to propel the Tar Heels to the national championship game on Monday.

“I know it’s going to be sore, and the next 24 and 48 hours in terms of treatment is going to be huge,” UNC coach Hubert Davis said of Bacot’s injury. “At this time, I don’t think there’s a player that isn’t hurt a little bit.”

As for his status for Monday’s game against Kansas, Davis does not think that there is any way he won’t play, joking that Bacot will be out there even he just stands in the lane.

“I can tell you, I can read that page, he’s going to play on Monday night,” Davis said.

Bacot spoke on his injury and decision to play as well. He gave one of the most badass quotes of all-time.

Armando Bacot just gave the quote of the night when asked about his injury.

“I thought 100 percent I was out for the rest of the game … and then something hit me like ‘I’m in the greatest college basketball game of all time.’ So I just had to thug it out.” pic.twitter.com/8CFCff4FKx

Former NFL team doctor of 17+ years, Dr. David J. Chao, offered an assessment of the injury. He also expects that Bacot will play.

#ArmandoBacot
Right ankle mild inversion lateral sprain before fouling out. Worry for overnight swelling but expect him to play Monday with a #SICscore of 83. pic.twitter.com/3WTwshtUJK

If Bacot said “f**k it” on Saturday, it certainly seems like he is going to do everything in his power to play on Monday. His reaction couldn’t be more relatable.