A Nasty Brawl Broke Out Between Mississippi State And Tulsa, But Mike Leach Didn’t Seem To Care 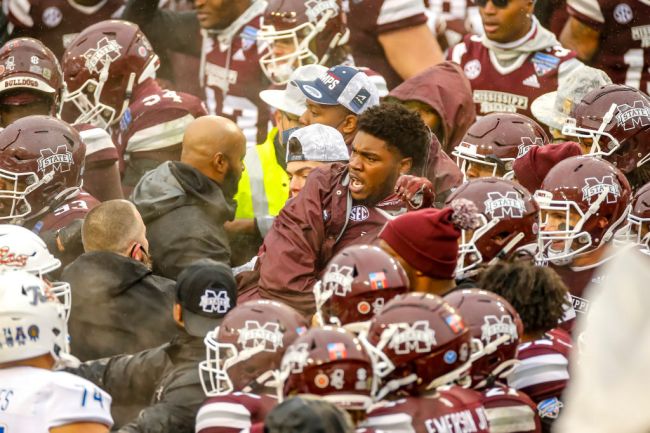 Mississippi State beat Tulsa 28-26 in the Armed Forces Bowl on Thursday but neither team won. An all-out brawl broke out between the two teams following the conclusion of the game, resulting in at least one injury. When the clock hit zero, ESPN cutaway to its second bowl matchup of the afternoon but quickly returned to Texas to show the aftermath between the Bulldogs and Golden Hurricane.

It was not just a scuffle, it was a full-on fight.

Mississippi State and Tulsa broke out into an all-out brawl after the Armed Forces Bowl went final 😳pic.twitter.com/Hbh8HLJHND

Tension was palpable throughout the entire game, stemming from a kerfuffle during warmups. As Mississippi State, a notoriously undisciplined program, took the field shirtless in wet, icy sub-40 degree weather, both teams began to run their mouths and pop off at one another near the sideline. 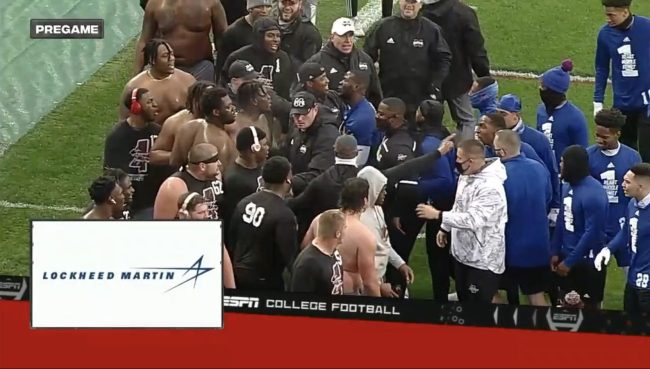 The No. 24-ranked Hurricanes entered the day at 6-2 with losses to only No. 21 Oklahoma State and No. 8 Cincinnati by a combined 12 points, while their unranked opponents came into the afternoon with three wins and seven losses in the Southeastern Conference. From the opening kickoff, both teams were chirping and playing nasty. Not the competitive kind of nasty, but the kind of nasty that stems from a real, deep-rooted detestation. It was the first-ever meeting between the two teams so the root is unclear, but nevertheless, it got ugly by the end.

At one point in the game, a Mississippi State wide receiver gave the middle finger to the opposing sideline, which is admittedly hilarious and harmless.

In another instance, a separate State player laid a questionable hit on an onside kick attempt and stood over the recipient, who stayed down with an injury.

As for the game itself, amidst a dirty and cold wintry mix, the score was tight through all four quarters. Mississippi State took a 7-6 lead to the locker room at halftime and went ahead 21-13 at the end of the third quarter, but Tulsa battled back to fall two points short in the end. When a few of the players from both teams went to exchange words at midfield after the clock hit zero, the brawl broke out and resulted in both sidelines clearing and coming to blows. Video surfaced following the game that showed a very arrogant victor prior to the fisticuffs.

Helmets were thrown, punches flew and another angle of the fight shows the extent of the ugliness. Starkville natives in attendance encouraged the behavior with incessant clanging of cowbells.

There were some serious punches thrown in this Miss St – Tulsa brawl, not to mention the kick! Couple more looks pic.twitter.com/GKkZfgueAp

If you watch the video again, you will see both teams are being separated, as is often the case with college football skirmishes, but Mississippi State linebacker Aaron Brule (wearing No. 3) throws the first punch on Tulsa corner back Reggie Ellis (wearing No. 15). Moments later, Bulldogs wide receiver Malik Heath (wearing No. 4), kicks Hurricane safety Tieneal Martin (wearing No. 7) in the head while he was on the ground. He then runs away like a coward.

Heath then runs up on Martin, who has lost his helmet, and attempts to punch him in the back of the head.

Heath went live on Instagram following the fight and was extremely proud of his performance.

This man is on here laughing about kicking someone in the face and then running away scared 🥴 bad look #ArmedForcesBowl pic.twitter.com/449vYLXzYa

He doubled down on Twitter with a since-deleted tweet. Defending himself by kicking a down player in the head is a preposterous claim. 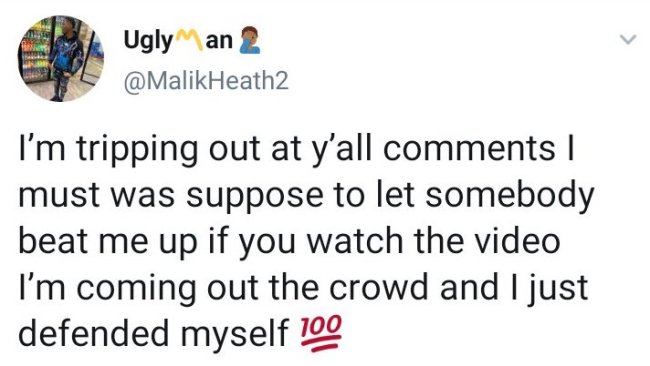 Coaches, law enforcement and staff eventually were able to break up the melee and each team went back into the locker room. One Tulsa player, safety Kendarin Ray, had to be helped off of the field with an injury following the separation.

Tulsa’s Kendarin Ray being helped off after being injured in the postgame brawl. pic.twitter.com/Ft90Ld3avu

After the game, Mississippi State head coach Mike Leach had very little to say about the incident and said that it “had not been a problem for the program before,” and that they should not do it anymore. Ever the wordsmith, Leach is.

Time for words of wisdom from Mike Leach pic.twitter.com/Kjip7R302L

History would show that Leach’s words were not entirely true. In fact, he received the opportunity to coach in the SEC almost one full year ago after Mississippi State fired its previous head coach Joe Moorehead. Prior to the team’s 2019 bowl game, then-starting quarterback Garrett Shrader broke his orbital bone during an altercation with his own teammate Willie Gay. The two allegedly got into a fight in the locker room after a bowl practice and Shrader missed the contest as a result. Gay had previously been suspended for academic fraud and ejected for fighting in the past.

So while there may not have been problems in Leach’s short tenure, Mississippi State used the incident (among other reasons) to release Moorhead from his position and then proceeded to hire the polarizing Air Raid coach. Both incidents were only two of a handful to occur in recent years and one set the precedent for the other.

Athletic director John Cohen fired Moorehead with a winning season, a win over the school’s in-state rival last season and an in-house issue. Leach had a losing record, lost the Egg Bowl and finished the year with a violent scrum on national television this season. Will he be held to the same standard? Likely not.

Regardless of what happens with the fallout, which should end with suspensions and player-specific punishments, there is a clear culture problem in Starkville that needs to be addressed. The receipts are there to back it up and Thursday’s Armed Forces Bowl epitomized the issues.