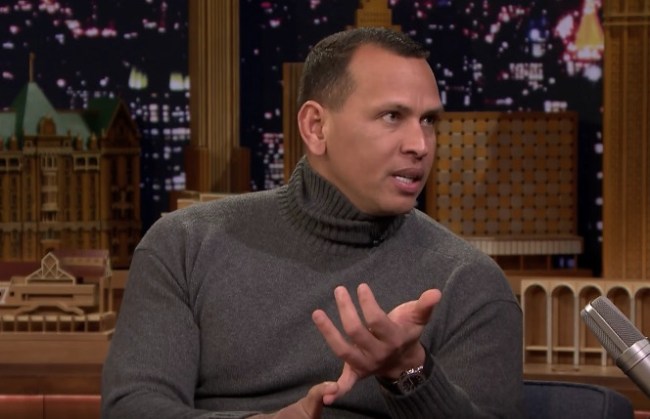 Alex Rodriguez, aka A-Rod, is seeing the second act of his career explode. After retiring from the New York Yankees with an MLB-record $480 million in career earnings, 696 home runs, over 2,000 RBIs, and a career batting average of .295 A-Rod is getting into media and broadcasting.

He’s slipping into the life of a TV celebrity pretty easily, something he was groomed for as one of the most recognizable athletes in NYC. Alex Rodriguez recently announced that he’s signed on to be an analyst with ESPN’s Sunday Night Baseball in conjunction with being a cast member on Shark Tank and on the ABC News network. You’d think that a man who earned $480 million for playing baseball would be content with transitioning into an easy retirement but you’d be wrong.

A-Rod was a guest on The Tonight Show Starring Jimmy Fallon last night where he discussed his new job with ESPN on Sunday Night Baseball and why he always sides with the women on Shark Tank:

I’m not a Yankees fan and thus I pretty much always hated A-Rod while he was on the field with the Yankees. But I have to admit he’s pretty good on Shark Tank. His reasons for betting on an entrepreneur are kind of laughable though…He’s going with body language and reading them ‘like betting a horse’ instead of focusing on the business idea itself.

Not every successful entrepreneur needs to be the face of the company. You can have a brilliant idea man who can execute and make a fortune but they might also be terrified of being on camera. But A-Rod’s successful as hell and everyone needs a strategy, right?