Arsenal May Have To Pay Up To £4.5m To Season Ticket Holders After Shocking Crash Out Of Europa League 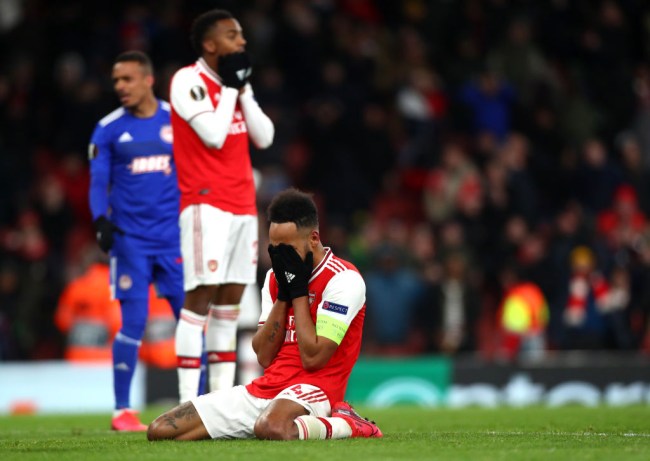 It has been an extremely difficult season for Arsenal. As far as the Premier League goes, the Gunners are ninth in the table with a league-leading 13 draws to their name. After a slow start to the season and a manager change bringing in Mikel Arteta just before Christmas a lot of the focus flipped to the Europa League.

Arsenal made the Europa League final a season ago where the Gunners were embarrassed by Chelsea, but any hopes of making another Europa run crashed and burned in a horrible, horrific embarrassing fire on Thursday.

Olympiacos knocked Arsenal out of the competition with a stunning 2-1 win in extra time at The Emirates and according to The Standard, it may end up costing the club millions.

Season ticket holders paid for a total of seven home cup games, but after the upset loss on Thursday, fans will only see a maximum of six. Arsenal will travel to Portsmouth for a fifth-round matchup in the FA Cup. If the Gunners earn a win it could mean a sixth home cup match, but if they lose then no more cup games for Arsenal at all.

According to the report from The Standard, the club would likely have to pay out more than £4.5m (over $5.7) to its 46,000 season ticket holders.

The money due varies, depending on  the position of their seats but it averages out at roughly £50 per cup game not fulfilled.

Given Arsenal have around 46,000 season-ticket holders that equates to a pay out of more than £4.5m if there are no more cup games at the Emirates.

Fans have the option of redeeming the money from the club or they can have the amount they are owed deducted from the price of their season ticket for next season.

With rumors continuing to swirl about Pierre-Emerick Aubameyang leaving the club next season, the horrible backline and overall disgust of ownership, things simply aren’t well in North London at the moment.