Liberty Going From Hugh Freeze To Art Briles Would Be Painfully On-Brand, Unfortunately 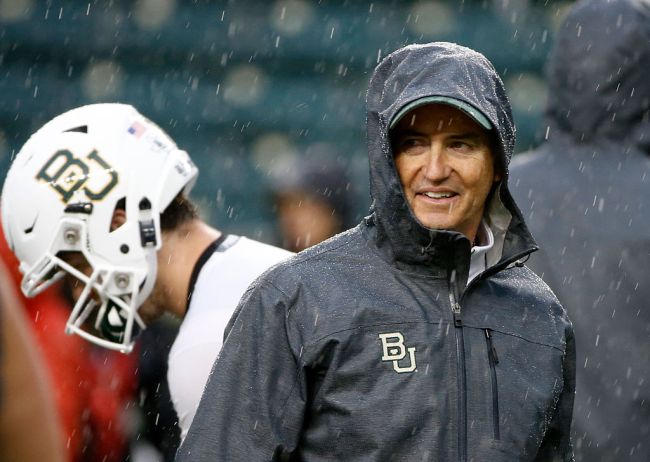 The college football coaching carousel is officially spinning after Auburn elected to fire Gus Malzahn on Sunday. While all eyes are on who will take over the Tigers program, another interesting development took place on Monday with Art Briles resigning from his athletic director and head coaching position at Mount Vernon High School in Texas.

This is significant news given the fact that Briles has been linked to a return to college football and if things fall into place as some are reporting they might, he could be taking over the Liberty program from Hugh Freeze.

Freeze is reportedly Auburn’s top choice to replace Malzahn leaving a vacant spot at Liberty and Brett McMurphy of Stadium is reporting that Briles would be the leading candidate to take over the Flames.

Talk about a hire that would solidify Liberty as being one of the more let’s say questionable schools in the entire country.

Freeze resigned from Ole Miss after the school was hit with recruiting violations and an investigation regarding calls to an escort service. Liberty hired him after he spent two seasons outside of the college coaching world.

As for Briles, during his time as Baylor’s head coach, there were multiple incidents of alleged sexual and non-sexual assaults involving football players. Briles and his staff were, per a 2017 legal filing, actively intervening in the discipline of football players in which they arranged for lawyers to keep things quiet.

Briles was fired in May of 2016 after an external investigation found that 17 women had been sexually assaulted by 19 football players. Another lawsuit that took place later suggested that as many as 31 football players had committed 52 rapes.

Briles received $15.1 million in a severance package after he was let go by the university.

It’s worth noting that Ian McCaw, Liberty’s current athletic director, is the former AD at Baylor and is the man that actually hired Briles at Baylor in the first place in 2007. McCaw resigned from his position at Baylor in 2016 just like Briles did and now it sounds like he could be playing the same exact game at Liberty.