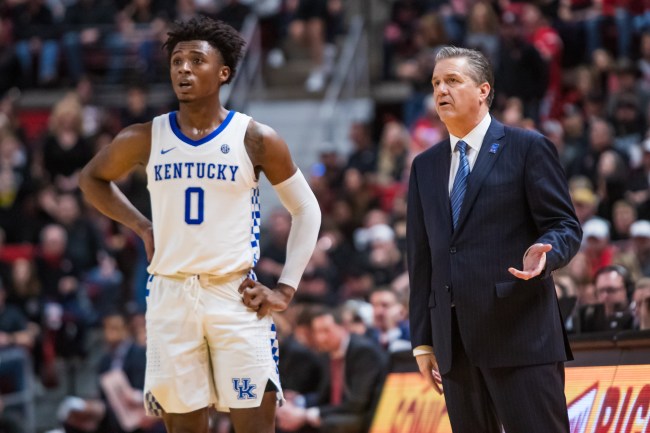 The sophomore, who has started 29 of 30 games this season and is averaging 11.5 points, 3.9 rebounds, 6.4 assists, reportedly got into an altercation with the coaching staff following a loss to Tennessee. Hagans, who has been criticized for inconsistent play, allegedly told coach Calipari ‘I’m in a bad way,’ and did not travel with the team to Gainesville.

Louisville fans smell blood in the water, and soon thereafter, a video landed on a a Louisville message board of Hagans flashing a fat stack of bills on his Instagram story. Cardinal fans immediately used it as ammo to implicate Hagans in being financially rewarded for his services on the hardwood.

I guess UK’s Ashton Hagans has been hanging on to his ‘Cost of Attendance’ stipend? pic.twitter.com/8I8saNMS8r

Wow .. I don’t know many college kids that have access to that kind of cash .. I (and no one I knew )certainly didn’t at that age !

Good for him though for building a nice little nest egg for the future ! pic.twitter.com/s9V4Sz6k1W

As far as this Ashton Hagans situation I just want to add it’s no fun when the rabbit has the gun. Louisville media has been accused of covering up scandals for years. Now that the shoe is on the blue foot, crickets. It’s all hilarious

Via Tim Sullivan of the Courier-Journal:

University of Kentucky spokesman says this video is dated and that its compliance department has already addressed the red flag raised by the large wad of cash in Ashton Hagans’ hands. Further information, UK says, is protected by student privacy.

A few people have reached out trying to ascertain the date of the Ashton Hagans Shoeboxxx Money video.

‘Dated’ now includes videos a few weeks old, 11 days or as some believe specifically from the evening of February 26th.

The video may also drum up previous suspicions of his alleged involvement with aspiring agent Christian Dawkins, one of three people convicted of felony conspiracy to commit wire fraud tied to college basketball corruption.

Hagans was named as one of the players at 12 Division I schools who Dawkins proposed monthly payments totaling thousands to.

Dawkins proposed a monthly payment of $2,000 to Hagans from October 2017 to October of this year, the ESPN story says. Then the monthly payment would increase to $3,000 through April of 2020.

Hagans’ father, a business owner, strongly denied his son even knew Dawkins, adding “Ashton doesn’t need nothing from no one.”