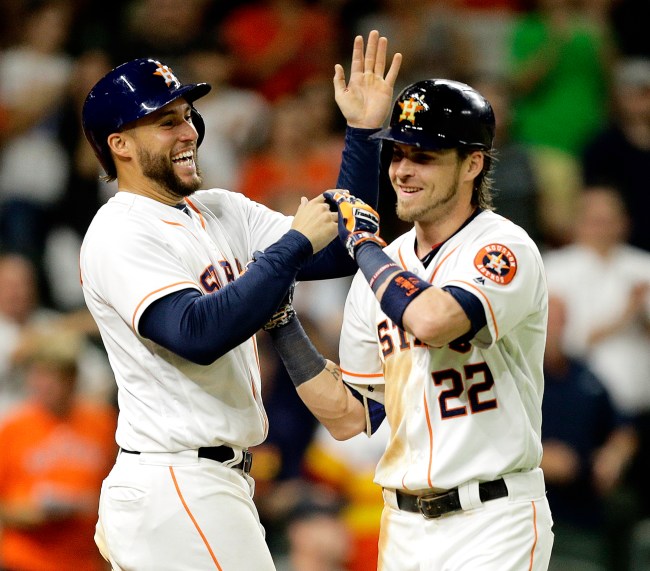 The Houston Astros’ cheating scandal really made every single person associated with the organization enemy number one within the baseball community. I mean, it makes sense considering the bullshit the team did in order to win the 2017 World Series title, which included drumming on trash cans in order to alert hitters of the type of pitches coming.

Although MLB never officially punished any of the players for their actions in the cheating scandal (nor did the league strip the title away from the team), the rest of MLB has sent a pretty stern message on their own: They don’t appreciate the way that the Astros “won” a championship. That’s led to Houston players being plunked repeatedly and, more recently, the team’s bench coach, Alex Cintron, getting a 20-game ban for igniting a brawl with the Oakland A’s.

Given the tension surrounding the Astros following the cheating scandal (and the harsh criticism from the entire baseball community, including numerous bean balls coming towards batters), it makes sense that some of the players on the team are a little bit fed up with all this. In fact, longtime baseball writer Buster Olney of ESPN even suggested that some anonymous agents and scouts believe the annoyance could lead to some superstars to leave via free agency over the next couple of years.

Buster Olney of ESPN reported there is a perception the Astros are facing an “exodus” of stars due in large part to the reaction to the team’s sign-stealing scandal. George Springer, Yuli Gurriel, Michael Brantley and Josh Reddick are all slated to become free agents this winter.

While it was unlikely the Astros would bring them all back under normal circumstances, players appear ready to rid themselves of the cheater label that’s clouded the franchise’s 2020 season.

Perceptions can change—especially if the Astros back up a Brinks truck in negotiations—but being on Houston’s roster has not been an easy task in 2020. The Astros have been regularly plunked by opposing pitchers and gotten into multiple altercations that have led to suspensions.

This is fucking hilarious, and reminds me of the time I threw temper tantrum after getting in trouble when I was six after hitting my little sister. Like, you did the crime and the cheating, now you’ve got to accept the punishment for doing so — no matter how many bullshit apologies you’ve already made.

The fact that some Houston players are so butthurt that they’d consider leaving the team in free agency because of the Astros’ cheating scandal just goes to show how sensitive these guys are. They clearly don’t have the mental fortitude to accept the responsibility for their actions, assuming Olney’s report has truth behind it.

And, sure, it was going to take lots of cash to keep All-Stars like George Springer, Michael Brantley and others around to begin with — because many of these guys are about to get mega deals — but it’d be pretty ironic if the team’s roster collapsed all because of a self-inflicted wound that led to an undeserving World Series title. I kind of hope this all happens, to be honest.