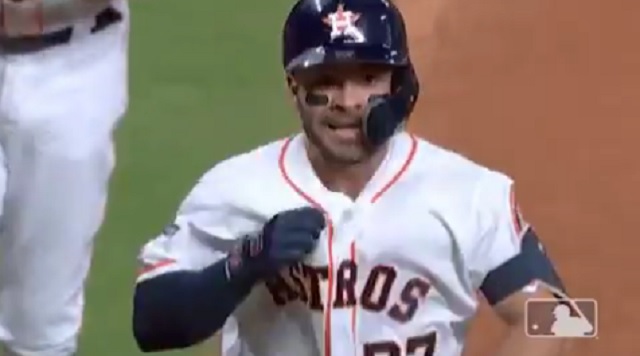 MLB players around the league are not happy with the Houston Astros right now.

The latest allegations made against the Astros came from someone posing as Carlos Beltran’s niece on Twitter and involves players wearing buzzers under their jerseys that relayed tipped pitches from the video guy watching the game in the hallway.

I’ve heard this from multiple parties too, for what it’s worth… https://t.co/zDlp0x4bKs

You'll be seeing this a lot.

Jose Altuve signaling to his teammates NOT to rip off his jersey in celebration because it would "allegedly" reveal a buzzer that would go off when triggered by someone on the Astros video team.

Beltran’s family has denied that his niece sent out the tweets and Jose Altuve shot down reports that he wore a buzzer under his jersey during the 2019 ALCS but MLB players were fed up nonetheless.

For the sake of the game I Hope this isn’t true.. if true, there needs to be major consequences to the players. That Completely ruins the integrity of the game!!!

They shouldn’t feel comfortable looking at any of us in the eye let alone on the field and any other MLB player feel different, they can get it too✌️🌞

What happened to the term “cheaters never prosper”?

I’m in a mood right now after hearing the latest bs teams have been up to. 😡

I’m not gonna make this about me cause after 2 shoulder operations I did not have good stuff at all. That said, every other pitcher out there should be furious and feel absolutely cheated

These reports of cheating from the @astros are next level. What a joke. If it is in fact 💯 % true then the WS in 17 should be stripped as well as all individual awards. 🤥🤥 Don’t @ me.

It's time for the players involved to step forward. Take your lumps publicly. Your name is coming out sooner or later. Maybe there's some integrity still in you somewhere.