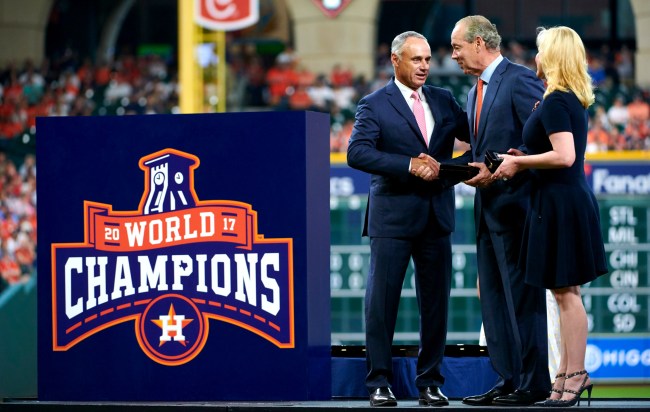 The Major League Baseball season may have been put on hold for now, but the Amercian court system is still chugging right along, which means that the Houston Astros are still waist deep in lawsuits related to the team’s sign-stealing scandal.

In February, it was reported that the Astros were the defendants in at least seven different lawsuits filed by players and fans.

Back then, the team’s lawyers issued a defense that basically amounted to “cheating in baseball is to be expected.”

“It is well established…that attendees or viewers at sporting events have no express or implied right to an event free of penalties, undisclosed injuries, rules violations, cheating, or similar conduct, and claims asserting such a right have been repeatedly dismissed,” the team’s legal brief read, reported Daniel Kaplan of The Athletic. “Even accepting the Complaint’s allegations as true, the alleged sign-stealing does not in itself render false any statement about the team’s strengths and successes.

“If there is any implied understanding of fans, it is that rule infractions will occur during the games.”

Related: ‘MLB: The Show 20’ Just Came Out And People Are Drilling The Crap Out Of Astros Hitters With Pitches

That didn’t sit well with fans, nor did the way the Astros’ ownership, management and players behaved, showing almost zero remorse, and even, as was the case in their lawsuit response, attempting to somehow defend their actions.

This week, in the lawsuit filed by Astros season ticket holders, the team’s lawyers argued in court papers that the organization has “expressed their sincere apologies and remorse.”

No, they really didn’t. Cubs star Kris Bryant even went so far as to say, “Watching their apology … there’s no sincerity, there’s no genuineness when it comes to it.”

Related: Former Houston Astros Pitcher: ‘A Lot Of The Guys On That Team’ Are ‘Wishing We Had Been Brave’

“The ‘sign-stealing’ controversy has been a source of great disappointment to Astros fans as well as to the Astros organization,” wrote the team’s lawyers, according to The Athletic. “On several occasions, members of the Astros organization – including individual players and its Owner, Jim Crane – have expressed their sincere apologies and remorse for the events described in the report by the Commissioner of Major League Baseball.”

“There is, however, no legal standing for season ticket holders like the Plaintiff to recover damages for their disappointment over the Astros performance for any of the seasons that may have been implicated in the controversy,” the response continued. “As many courts have held, a ticket holder has only the right to enter a venue and to have a seat for the ticketed game, and cannot complain afterwards that the game should have been played differently.”

Looks like the Astros are sticking with the “cheating is to be expected” defense. Who did they hire, Lori Loughlin’s attorneys? Also, why is sign-stealing in quotes in the legal response, like they didn’t really do it?

Despite the Astros’ claims, this issue is not going to go away anytime soon. In fact, it is only going to get worse, according to Bob Hilliard, an attorney for one of the two season-ticket holder lawsuits.

“We’re going to go take the depositions of all the players involved wherever they are now, and I want to know from Day One, how this happened and who was involved in it,” said Hillard.

Get your popcorn ready.