Josh Reddick Says Houston Plans To ‘Shut Everybody Up’ By Winning, Proves The Astros Are Still Clueless 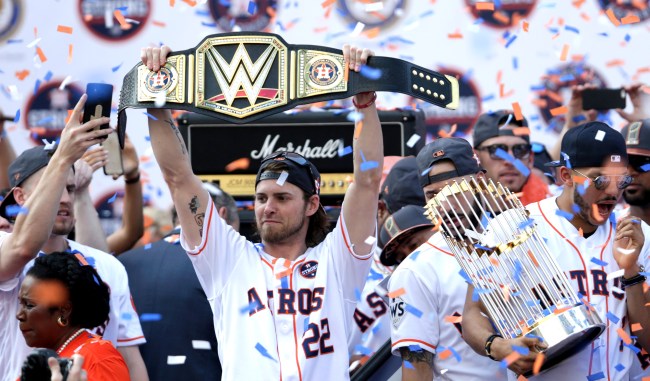 Houston Astros outfielder Josh Reddick, one of the members of the 2017 team that cheated its way to a World Series title and an appearance in another in 2019, claims to have been one of the few Astros players who did not use the team’s illegal trash can banging system of stealing signs.

He also added, “I’m not trying to individualize myself among these guys because we all could have stepped up and done something about it.”

Which is pretty comical considering his comments to the Washington Post on Wednesday.

“At some point, you have to move on and not give a shit,” said Reddick. “We’re going to go out there and win and shut everybody up.”

Reddick added that if Astros hitters numbers decline in 2020, “people are going to look back and say, ‘They’re not using anything, so they obviously suck without it.’ But that’s not the case. We got too many good players in here.”

Man, if Reddick thought Yankees fans were disrepectful, dangerous, unsafe, and scary last season, just wait until he gets to the Bronx this summer.

He wasn’t the only Astros player to pop off and talk shit about how good Houston is going to be this season, despite their clubhouse reportedly being a “(bleeping) mess.”

“[The teams talking trash are] going to have to play us,” pitcher Lance McCullers told the Post. “Except for the guys who are popping off the most.”

McCullers is the guy who Cleveland Indians pitcher Mike Clevinger put in a body bag when he tried to clap back at him about cheating.

More than likely he was referring to National League players like Cody Bellinger, Justin Turner, Kris Bryant, and Nick Markakis who eviscerated the Astros with their comments.

“Those guys aren’t going to have to face us, which is maybe why they feel like they can speak like that,” McCullers continued. “But we’re moving on. That’s not what people may want to hear, but we stood here as men and we addressed [the scandal]. … We’re just looking forward to playing baseball again.”

Astros pitcher Justin Verlander, who gave perhaps the most hypocritical interview this spring when talking about the cheating scandal, also tried to ype up his team, “We’re still pretty set with talent. I love our team. I love the rotation.”

Throw those comments in with Astros shortstop Carlos Correa saying Bellinger should “shut the fuck up,” the team’s owner Jim Crane’s complete lack of accountability, along with MLB commissioner Rob Manfred’s utter incompetence, and “moving on” is something the Astros will not be able to do for a very long time.