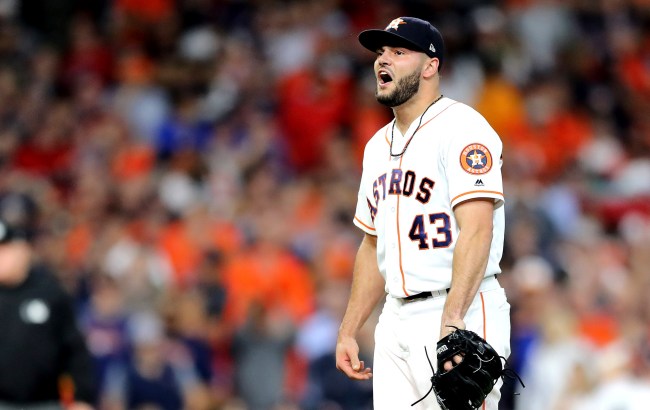 Little tip for any Houston Astros players out there: shut the f**k up. It’s too late now. You all had your chance to speak. In fact, we were waiting for someone from the organization to issue a denial, but it never happened. And now the organization is without a manager or G.M.

Following Major League Baseball’s decision to suspend Astros manager A.J. Hinch and general manager Jeff Luhnow (who were then fired), fine the team the maximum amount allowed ($5 million), and revoking Houston’s first- and second-round picks in the 2020 and 2021 drafts, but NOT vacate the team’s 2017 World Series championship, the less said the better.

This is something Astros right-hander Lance McCullers learned the hard way when he decided to clap back at outspoken Cincinnati Reds pitcher Trevor Bauer who decided to do a little gloating at McCullers’ expense after having his Astros cheating accusations vindicated.

Bauer was joined by the by pitcher Mike Clevinger, Bauer’s former teammate on the Indians, in taking shots at the Astros and McCullers.

McCullers fired back saying he was living “rent-free” in either Bauer or Clevinger’s head.

And off we went…

Judge not, lest you be judged. Isn’t that what the book of GOD says? Remove the plank of wood from your own eye before inspecting the speck of sand in someone else’s? https://t.co/RA2FUFYE6u

We don’t know each other either yetttttt you speak on me as if you know me…🤔🤷🏻‍♂️ https://t.co/RCKwvfWiav

Then when someone on Twitter brought up Clevinger allegedly cheating on his girlfriend and mother of his child, McCullers re-tweeted it with the following comment.

It was at that point Clevinger decided to drop the hammer on McCullers.

Yeah drop your ERA first and speak another word about something you have no idea about and we can be talking in person https://t.co/y49zqi9g9d

Bauer and Clevinger weren’t done though.

Spoken about this a lot. Not a bigger story because pitchers league wide use foreign substance to boost spinrate. But you can ask some of the players about melting pine tar, Coca Cola, firm grip and rosin together in a coke can on the stove to create their substance of choice 🤷🏻‍♂️

I mean, once you know you know right?

Pine tar, firm grip, Coca Cola boiled/melted together in a metal coke can. And maybe some rosin. Just a guess though 😉 https://t.co/BPlxQG9ojf

This whole thing is just getting started too. Wait til we get news on the Red Sox and maybe the Mets.