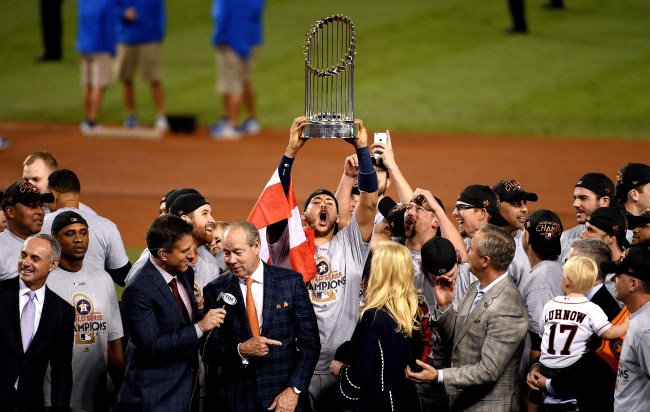 Another day, another accusation against the Houston Astros for illegally stealing signs using some very clandestine measures.

The lengths that the Astros allegedly went to in an effort to steal their opponents’ signs is far beyond anything ever seen in the world of sports.

It began with a report by The Athletic in which four people formerly with the Astros, including pitcher Mike Fiers, claimed the team used a camera in center field of Minute Maid Park to steal signs electronically in 2017.

This opened up the floodgates for other players, executives and scouts to level more accusations, including the various ways the Astros relayed the stolen signs using computers, video equipment, auditory and visual cues, and other electronic tools.

In an email acquired by The Athletic, Astros executive reportedly asked scouts for help with stealing signs, possibly using cameras in 2017.

On Monday, Joel Sherman of the New York Post shared yet another allegation against the Astros which may explain how they communicated stolen signs to batters when banging on a trash can or signaling from the bullpen were perhaps not an option.

In recent days I have had scouts and executives talk to me about a variety of methods they think have been or could be employed, such as a realistic-looking electronic bandage placed on a player’s body that buzzes in real time to signal what is coming — one buzz for a fastball, for example — if the surveillance determines what type of pitching is coming. One person I spoke to has ties to the Astros and said he already had spoken to MLB’s investigators.

I have no idea what an electronic buzzer looks like but someone just sent me this as a 'maybe that's what that is?' pic.twitter.com/xLSkqhgGeO

Perhaps the most stunning part of all of this is the fact that not one Astros player other than Carlos Beltran, who basically had to talk because of his new job as Mets manager, has publicly denied any of the allegations or even commented at all.

Most notably, this includes the previously very outspoken Justin Verlander, who just won his second Cy Young Award at the age of 36, and has more than once publicly complained about keeping the playing field equal in MLB.

If this and other allegations against the Houston Astros for the illegal stealing of signs during their World Series-winning season of 2017 and beyond turn out to be true there won’t be a punishment harsh enough that MLB can levy on the organization. This is 1919 Black Sox levels of misconduct, completely throwing the integrity of the entire game into question.