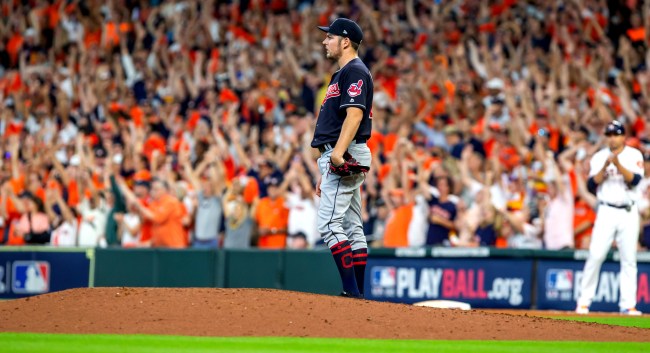 Cincinnati Reds pitcher Trevor Bauer is well-known for marching to the beat of his own drum (he actually chooses to be a free agent every offseason, by his own choice).

Bauer also has a well-known dislike for the Astros having accused Houston’s pitchers of cheating in 2018 (which he later walked back, but only while accusing “over 69 percent” of MLB’s pitchers of also cheating and getting into a small Twitter beef with Astros starter Lance McCullers).

Not jealous my friend. Promise you that. I respect what you all are doing over there. My gripe is with the hypocrisy of @mlb for selectively enforcing rules when it suits them

Here are Trevor Bauer’s full statements on anything relating to the Astros, the bigger problem with tacky substances and how those rules are enforced and his potential solution for it all pic.twitter.com/BEc9P1CEo4

Bauer’s pessimism regarding the success of Houston’s starting pitchers wasn’t completely without merit. Dallas Keuchel, Charlie Morton, Gerrit Cole, and Justin Verlander all became almost unhittable (or even more unhittable) after they joined the Astros.

So when the bombshell report by The Athletic with former Astros, including starting pitcher Mike Fiers, stating that the team cheated to win during their World Series-winning season in 2017 and perhaps beyond, Bauer apparently felt vindicated enough to post a few tweets about it including one superbly hilarious video showing Alex Bregman hitting a home run off him during the 2018 ALDS off, you guessed it… an off-speed pitch… in Minute Maid Park.

So @Ken_Rosenthal has written some very interesting articles in the last couple days on @TheAthletic y’all should check them out!

When someone on Twitter asked him if he was indeed feeling vindicated, Bauer played coy, acting like he had no idea what that person was talking about.

Troll on, Mr. Bauer. Troll on.

When you see the Astros cameraman in center field pic.twitter.com/H64UBUA3Ac